If you’re looking for 100% no-one-can-no-anything-ever privacy, all I can tell you is you’re in the wrong place. And I don’t mean our website. I mean if you’re on the internet, you have no expectation of privacy no matter what any erudite geeky type tells you. But that does not mean you shouldn’t do all you can to make it more difficult for snoopy government agencies, rogue police states, and hackers to scrutinize your online activities, even if you’re only sharing a secret recipe for Grandma Gertie’s rhubarb-raspberry pie.

When it comes to privacy, you gotta hand it to the Swiss. They know what they’re doing over there… and to think it all started with cheese. The Swiss always seem to stay out of wars, make great cheese, great beer, ski a lot, play a lot, keep a pristine environment pristine, and, of course, to this day, remain the world’s only (almost) true democracy. The USA is not, of course, true democracy, it’s a republic, but that’s not a bad thing, though. Is it?

When it comes to privacy and security, I don’t think anyone would put much faith in companies headquartered in the good ol’ USA … not with such entities such as the NSA or CIA skulking around in the background hiring untold numbers of snoopy people and all funded with unlimited budgets. And let’s not forget the senators who want to end end-to-end encryption and make it easier for the Feds and the cops, and — let’s not forget the HACKERS — to more easily stick their noses in everyone’s business.

And I yammer now. Forgive me.

Email apps and sites which are based in the USA  are always going to be under the all-seeing eye of the USA, its agents, and/or its paid hooligans. Right? Well, you have to assume that? Right? And if you have gobs of money that you don’t want anyone to know you have, what would you do? Stick it in a bank in the USS or a bank in Switzerland? I am guessing Switzerland. I don’t know from personal experience since I don’t have any money. But I’m guessing Switzerland… or Grand Cayman.

Gmail, Outlook.com, Yahoo Mail – all are based in the USA. So when you sign up for, let’s say, an Outlook.com account, you have to give them an alternate contact (email address/cell phone number) and all sorts of other  — possibly– personal information. Like the name of your first-born child. Not really…  just kidding!  The same is true of Gmail and Yahoo.

But at this juncture, who would sign up or use a Yahoo account? Not you, right? Not as one of our informed readers, right?  Only those who don’t care much about privacy or security, would use a Yahoo account, right?  I mean, one-billion PLUS… accounts hacked?

Yahoo should put up a sign like McDonald’s use to have. Do you remember that sign, the one that said: “Over one-billion hamburgers sold”.  Geez! That’s one heck of a lot of cows!

Yahoo should put a sign on its email site that says: “Over one-and-a half-billion accounts hacked!” Hey, but unlike McDonald’s, at least they didn’t kill any cows, did they?

I made Yahoo! a sign – they can use it no fees, no charge, a gift from me!

Anyway… sometimes — but not too often — I feel bad for those who are paying for VPNs, using the Onion router and skulking around on the interwebs wearing dark glasses thinking that their web and cellphone activities are private. Ha!

But, come to think of it, maybe all those things they do to make their activities a bit harder to track than most of us. Most of us just lay it all our there for any clandestine prying eyes to see.

Thankfully, there are no laws YET that say we must it easy for the enemies of privacy to grab our stuff, right?

I wrote my senators about this but they both use similar boilerplates, so the only answer I got was from both of them was something like:

“I’ve done a good job for you. If you vote for me in November. I’ll try like heck to answer your question then. I promise. But right now I’m in Lower Slobovia doing some fund-raising for myself and …”

About now, you’re wondering since you clicked on this week’s “rant” or “essay” why you’re reading the freeware pick/site pick this week. This is both, I promise.

Part II  Email Privacy & the Freeware/Site of the Week Pick

ProtonMail is a mail service that was started for use by scientists at CERN. You think I’m kidding but I am not.

CERN is the European Organization for Nuclear Research, where physicists and engineers probe the fundamental structure of the universe. … The name CERN is derived from the acronym for the French “Conseil Européen pour la Recherche Nucléaire”, or European Council for Nuclear Research…”

Now, you can imagine that a bunch of big brains emailing each other about the fundamental structure of the universe, nuclear weapons, and secret recipes for bombs, are sure not going to want every Tom, Dick, and Harry reading their emails. No way! They wanted privacy. Heck, they didn’t even want the company hosting the email service to be able to read what they were writing. Thus ProtonMail was born. In those early days, ProtonMail was used by fewer than 1000 scientists at CERN, now it’s used by millions of people – hopefully not you yet though, or this is a lot of writing for nothing.

We tried ProtonMail a few years back and we impressed. Once we set up the account and tested it, we found it worked – and looked – a lot like Gmail and Outlook.com (and Yahoo… but why do you keep bringing them up?).  And that means a lot. Because we know if you sign up for a ProtonMail account, you’re not going to have to spend a week just trying to learn how to use it. Nope! Once you get your account, you’ll be able to start using it right away. And keep this in mind. If you have some top secret info you want to share with your friends or associates, if they have ProtonMail, your emails to them are encrypted end-to-end – which is what our senators are so upset about. They don’t want end-to-end encryption, they want a backdoor built-in so they can stick their noses into your business whenever they decide that your business is their business.

ProtonMail has a free option and it works well. You don’t get much space, but if you just use it for email, you should be fine. If you need more space you can upgrade to a paid plan, the cheapest of which 4 EU which is about USD 4.50.  If you don’t want to pay, just use the free account. The good thing about the paid levels is that you won’t see any advertisements and ProtonMail does not need to collect your personal info or scan your mail to collect data to sell to pay for a free service like all the other free email services do.

There’s no skimming of your personal data and no ads, so you can’t expect ProtoMail’s free tier to have as many features as do Gmail, Outlook, and you know who.  But if you want more privacy for some or all of your emails and you can live with the limited feature set of Proton’s free service, ProtonMail might be what you’ve been looking for. And you don’t mind paying a few dollars a month you can bet most o the features the others offer with no data collection and no advertising.

ProtonMail is a choice, and we think it’s a good one if more privacy is important to you. Recently ProtonMail added a new feature that no one else can offer… you@pm.me  addresses. You can have a cute email like abigail2@pm.me.

Time for some screenshots to show you what ProtonMail looks like. The first thing you’ll notice it looks familiar – it doesn’t look “geeky” or strange. 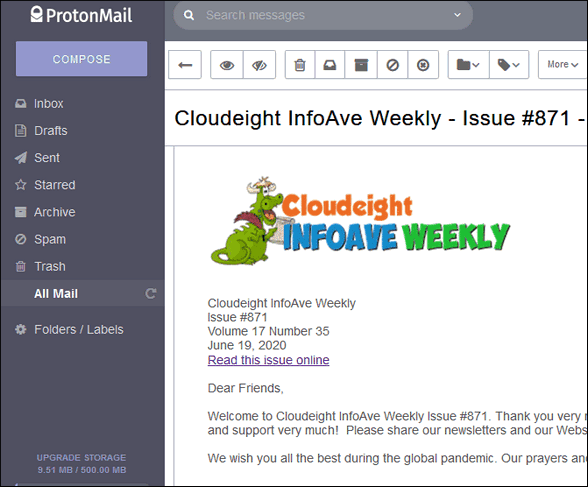 Above: Our Weekly – non-geekly newsletter – lookin’ good in ProtonMail. 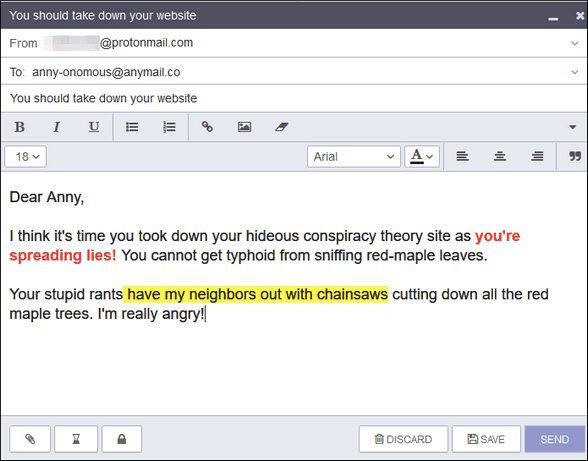 Above: The compose window in ProtonMail is very much like other services. You can change fonts and font colors, font sizes, indent, bold, and all that other stuff. 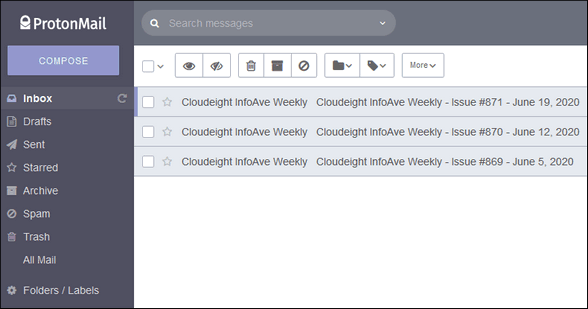 Above: The Inbox. Does it look familiar?  Look ma! They don’t censor our Weekly non-geekly! 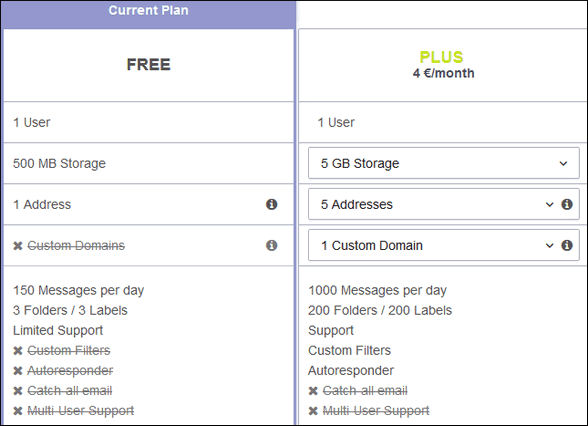 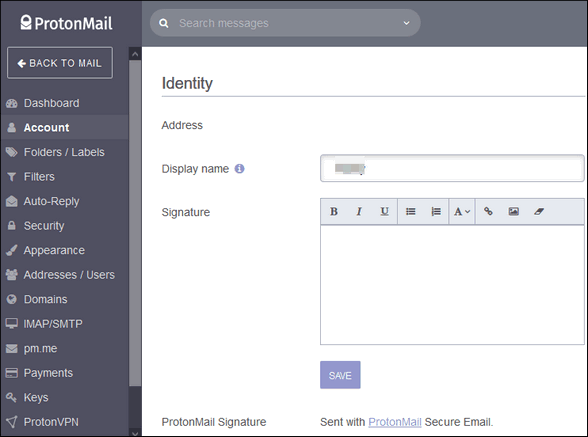 Above: On the left side of the screenshot you can see all the settings. Some of these are for paid users only.

And this my friends is my first and maybe last attempt to combine a freeware/site pick and a rant. Consider this an experimental amalgam.

Will I dare to do this again? That is up to you!