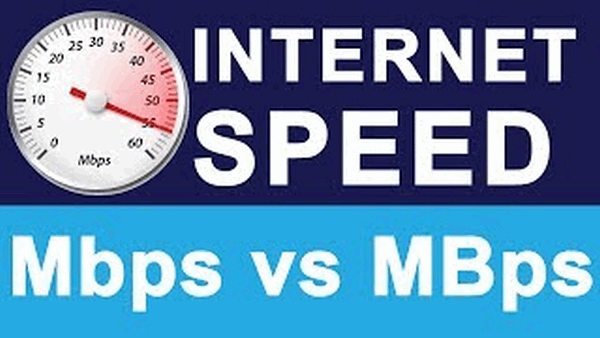 You’ll often see advertisements for providers advertising the fast internet speeds you’ll get if you switch to their services. And all the providers are very careful never to say megabytes or megabits. You’ll notice they’ll say something like you’ll get (up to) 300 Megs per second.

Now, most people would automatically assume that when they advertise 300 Megs per second (download speed) that you’ll be downloading at somewhere around 300 megabytes per second. Then the wheels start spinning… people start thinking…”Hmm, I can download a 2 GB movie in less than 10 seconds…t that’s great. Sign me up!”

But wait. There’s something wrong here. You’ll seldom hear or read about an Internet provider offering fast internet speeds in megabytes per second and you’ll learn why they all (or most) use the term “megs”.

Most of you know what a megabyte is, but not many people know what a megabit is. Internet service providers know this and use the word “megs” knowing (I think) that most people will assume megs=megabytes.

Now to explain why providers use megs instead of telling you the real speed they offer… there’s a big difference between megabytes and megabits. And to explain this to you, we’re going to defer to the experts at highspeedinternet.com …

Megabits vs. megabytes: Why it matters

These subtle differences in units make it easy to flub your math when dealing with your internet speed. If you happen to get them mixed up, your calculations will be off. Way off.

For example, let’s say you want to download a 500 MB file, and you have a 100 Mbps internet connection. If you don’t notice the capital B in the file size, you might estimate that this download would take five seconds. However, the units don’t match up. The file size is measured in megabytes, while the connection speed is measured in megabits per second. Since the file size is eight times larger than you originally estimated, it actually takes eight times as long to download—40 seconds.

Now, waiting 35 seconds longer than you expected isn’t too bad, but waiting an extra 35 minutes on a download that was supposed to take only five is more of an inconvenience. This can also be frustrating if you realize you’re paying for an internet connection that gives you a lot less speed than you thought…

Now Megs won’t fool you, because now you know what Megs really means.

One thought on “Don’t Let Megs Fool You!”