Over the past couple of years,  several readers, who had problems after updating to a new Windows 10 version. tried to use System Restore to roll back their computer to the previous version of Windows only to find out, the hard way, that System Restore does not work for this, and can sometimes can cause serious Windows problems.

System Restore is great for many things. For instance things like these:

1. Your computer is running well and then you install a program and it messes up your system.

2. You make some changes on your computer and things start going awry.

3. You edit the registry and you change something you shouldn’t have.

4. You downloaded hijacker bundled in some other software and can’t get rid of it.

Running System Restore as soon as you start having problems after doing things like these is the easiest way to undo whatever you changed or installed that caused you major problems. But System Restore should not be used to roll back Windows 10 Version updates like the April 2018 Update (version 1803).

If you have major problems after updating to a newer version of Windows – for example Windows 10 April 2018 Update –  use the following method to roll back the update and return to the previous version of Windows. If you roll back this way you will not lose any programs or data as long as you this within 10 days of installing the Windows 10 April 2018 Update. After 10 days, this option will no longer be available.

Here’s the proper way to go back to he previous version of Windows if Windows 10 April 2018 Update causes you major problems.

4. In Recovery you should have at least 3 options “Reset this PC”, “Go Back to an earlier build” and “Advanced startup” 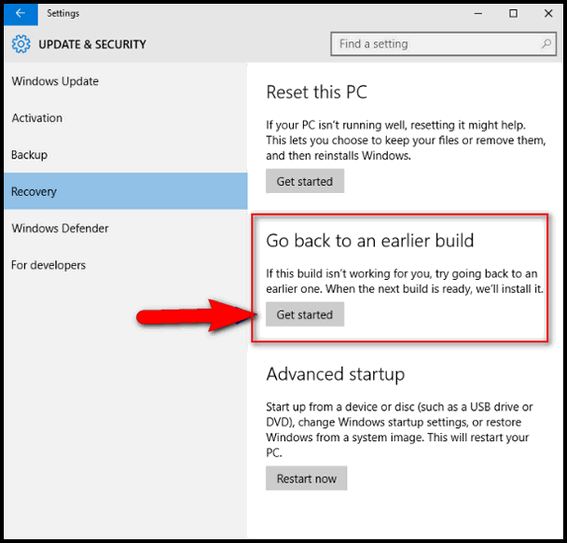 If you don’t see “Go back to an earlier build” as one of your choices then:

a.) The update was not a version update.

c:) You see the option but it’s not clickable or doesn’t work – you have waited too long.