If you’re one of those who think that the most dangerous threats to your computer are viruses, you’re wrong. The chances you’ll encounter a virus are 100 times less likely than you are to encounter malware. And the good news is: If all you are concerned about are viruses, just about any old antivirus will do. Viruses all have similar signatures — they all operate in a similar manner so they’re much easier to detect than malware which comes in thousands of different variants – most operating vastly differently from the rest. Viruses are much easier to detect – they’ve been around for a long, long time and virus detection has evolved to the point that – as we said – almost any anti-virus will protect you. Of course, most antivirus companies would love to convince you otherwise.

When we started Cloudeight Direct Computer Care in 2011 we had no I idea what to expect. We certainly didn’t expect to find so many computer problems caused by malware and pups. And we sure did not expect to find that 90% of all the computers we have worked on have been infected with malware. That’s a fact – not an exaggeration. It’s rare to find a computer that does not have any malware on it…and when we do it’s usually the malware / PUPs causing the computer issues.

So over the last few years we’ve become convinced that a good percentage of computer problems are caused by malware and PUPs. And they have become almost ubiquitous over the last decade as more and more freeware is bundled with malware, search hijackers, home page hijackers, toolbars and other garbage that really takes a toll on Windows computers. And the reason why so much malware and PUPs are around is because of good old fashioned greed. Malware developers discovered that if they paid freeware developers 50 cents to a dollar a download to put their garbage on people’s computer thus digging their dirty tentacles deep into Windows PC, they could a fantastic return on their investment. Much better than thowing money at advertising banners – after all they can make money by infecting PCs so every search, every ad, everytime the user of the infected PC uses the Internet – they (the malware developers) get paid.

And once upon a time Malwarebytes was our program of choice to remove this insidious garbage from peoples’ computer, but a couple of years ago or so, Malwarebytes took a curious turn and stopped detecting malware and PUPs from the Web’s biggest malware distributors like ASK (IAC) and Conduit. We tried to find out why, but the wouldn’t answer our emails. We ran test after test and Malwarebytes was barely detecting anything on heavily infected computers. We abandoned our recommendation and support of Malwarebytes and began a two week search to find something that could clean infected computers and help prevent them from getting reinfected. We tested over a dozen security products – and the winner, through every test was Emsisoft.

To make a long story short, Emsioft has never let us down, in fact they’ve continue to earn our trust by providing our mutual customers with world-class support and a world-class product. Over the time we have been recommending and endorsing Emsisoft, we have been been constantly reminded how good our choice was. Consistently, over the course of the last two years, Emsisoft has won many awards for its excellent protection. We were happy to learn that again this week Emsisoft was one of only two products that stopped 100% of the threats that were thrown at it during extensive testing. However, some of the other well known antivirus and antimalware software didn’t fare so well:
Failed = The security product failed to detect all infections and remediate the system during the testing
procedure. 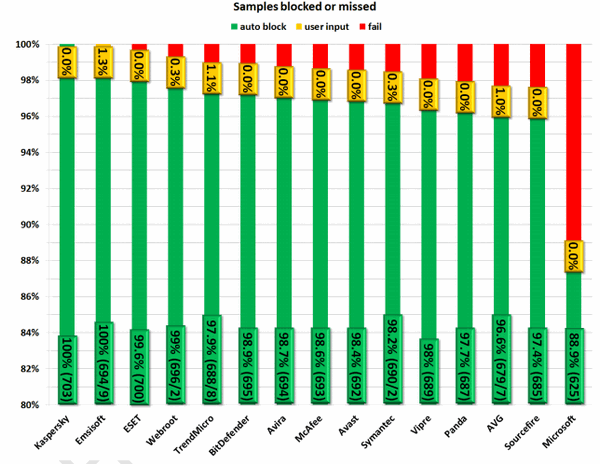 Above: The test results in graph form… the more red the worse the detection rate.

We whole-heartedly agree with Emsisoft when they say:

…Any anti-malware worth its price tag should be able to remove any malware from any infected system – but, an anti-malware should really be more than just a cleanup crew. Any anti-malware that’s truly worth using should actually be able to prevent any new malware from getting in, and render the dangers of infection and the frustrations of cleanup completely unnecessary. The latest MRG Effitas 360 Assessment has shown that Emsisoft Anti-Malware can do just that.

In this full spectrum, “real-world” assessment of 17 of the most popular anti-malware vendors in use today, Emsisoft Anti-Malware was one of only two products to block 100% of all malware samples used. 279 trojans, 203 financial malware variants, 67 backdoors, 60 ransomware variants, 42 potentially unwanted applications (PUPs), 21 rootkits, 31 other malware threats – and not a single one got through.

Needless to say, we are very proud of these results because they confirm to our users that they have chosen one of the best anti-malware solutions available today. On an Internet where the amount of time a malware infection resides on your PC is directly related to the amount of money a malware author can make at your expense, comprehensive prevention is crucial. In fact, in the particular case of un-decryptable ransomware, prevention is the only way to avoid financial loss, as just “cleaning up” is usually impossible.

Finally, we want relate a rather typical experience with a customer we had this week. She was using Avast and Malwarebytes. We suspected her computer was being overwhelmed by malware just by looking at her processes, startup programs, browsers and her app data folder.

We ran a scan. This woman, who trusted her computer to Avast and Malwarebytes, had over 200 malware files on her computer. We installed Emsisoft for her after removing Avast. Emsisoft provides excellent virus protection as well as malware protection. And now she has the peace of mind she deserves – her computer is well protected and she won’t ever see her computer become overwhelmed by malware and PUPs. To see the results of our initial scan of her PC click here.

We know it’s hard for you to believe anyone anymore on the Web. Everyone is trying to convince you that one product is better than another. Everyone seems to have something negative to say about everything. But when we say we think Emsisoft is the best antivirus and anti-malware you can put on your computer – we mean it and we believe. We use Emsisoft on all of our computers – and so do our friends and family members. We trust the program and we trust the company. Emsisoft Anti-Malware (and antivirus) is the best security solution for your computers. Not only is Emsisoft Anti-Malware a world-class program that was one of only two programs to block 100% of malware, rootkits, and other malicious files, Emsisoft backs their product with the best support we have ever seen. They treat our mutual customers with respect and give each and every person who contacts for help, a personal reply.

In a Web full of half-truths, charlatans, avarice and lies, it’s hard to know who to trust and who to believe. We can only tell you that we believe in Emsisoft and the test results make us proud.

Find out more about Emsisoft at http://thundercloud.net/emsisoft/