Google’s 21st Birthday: 8 Things You May Not Know About Google

Google’s real birthday is known to only a few… however, the consensus is that Google has at least six different birthdays. Officially, Google chooses to celebrate its birthday on September 27. Using Google’s official birthdate – September 27, 1998 – this year Google celebrated its 21st birthday. It seems like Google has been around forever, doesn’t it?

In honor of Google’s 21st birthday, here are 8 things that you may not know about Google.

1.) Google owns common misspellings of its name such as gooogle.com, gogle.com, and googlr.com, and automatically redirects users to the correct address.

2.) Google was willing to sell to online company Excite in 1999 for $1 million but Excite rejected the offer. Google is worth some $120 billion today. Yep, Excite is still around. If you open Excite and try their search engine, you’ll see why they should have spent that $1 million twenty years ago.

3.) If you go to www.google.com and look up the word “askew” or “tilt” (no quotes), you’ll find all the results are skewed. 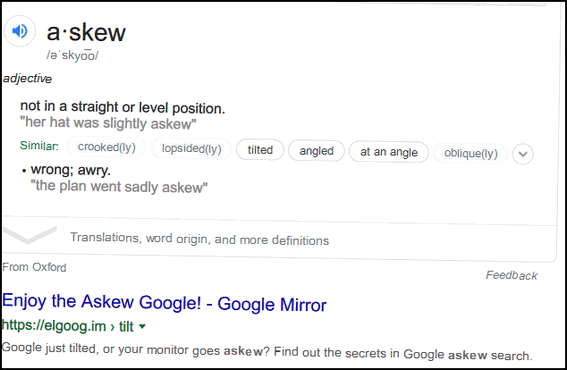 4.) Go to www.google.com and search for the term “Blink HTML” (no quotes) and look for the blinking text.

5.) Visit www. google.com and search for “Google in 1998” (no quotes) and you’ll see how Google looked in its first year.

6.)  At the Googleplex, Google’s headquarters in California’s Silicon Valley, there is a giant statue of a T-Rex dinosaur, which is often covered in flamingos. Rumour has it that this is a reminder to Google employees not to allow the company to go extinct. Too bad Montgomery Ward, Studebaker, and other extinct company didn’t do that. Would it have helped?

7.)  Just one Google search uses around the same amount of computing power it took to send the Apollo 11 astronauts to the Moon.

8.)  Google’s headquarters in California is huge with plenty of greenery. But Google doesn’t use lawnmowers,  it uses goats to keep the grass trimmed.

5 thoughts on “Google’s 21st Birthday: 8 Things You May Not Know About Google”