There are a lot rumors that come and go about ISPs and their ideas for charging for customers’ for extra bandwidth usage. Some ISP’s are still toying with the idea of limiting bandwidth or charging customers for exceeding a predetermined monthly bandwidth allowance. Bandwidth limits may well be something some of us will have to deal with eventually. As more and more smartphones and iPads and other ultra-portable devices connect to the Internet and gobble up more and more bandwidth, ISPs are bound to have to increase the amount of bandwidth they offer; and that’s going to cost them more money. If they have to pay more, you can bet you will have to as well.

Companies are working hard to make packages containing less product look the same size – so they can sell a smaller amount of product for the same amount of money. For example: Skippy peanut butter: They’re putting bigger “dimples” in the bottom of their peanut butter jars so the jars look the same size but contain 2 ounces less peanut butter. They sell jars missing 2 ounces of product for the same price as the old jars with a smaller dimple in the bottom. They should have just left the quantity alone and raised the price rather than trying to fool the consumer. But it seems consumers like to think they’re saving money – or at least not spending more.

The same thing holds true for ISPs. If they want to make more money, just charge more money, instead of using overage fees (fines) to stick it to the customer. Right now, no U.S. ISP (we know of) is charging a bandwidth fee to those who exceed a certain amount of bandwidth. Comcast tried it, but soon abandoned it – probably because none of their competitors followed their lead.

Anyway, it’s interesting to see how much bandwidth you use. And there’s a free program you can download to help you track your bandwidth usage. It’s called NetMeter. NetMeter keeps your total bandwidth usage for each day of the month, shows you your current month totals and a lot more. NetMeter is something all of us using high-speed Internet connections may eventually need; for now, it’s fun to see how much bandwidth we use. Well, maybe it’s kind of geeky? Still it’s fun! NetMeter works with Windows XP, Windows Vista, and Windows 7 – 32 bit and 64bit.

You can read more about NetMeter and download it free from this page. 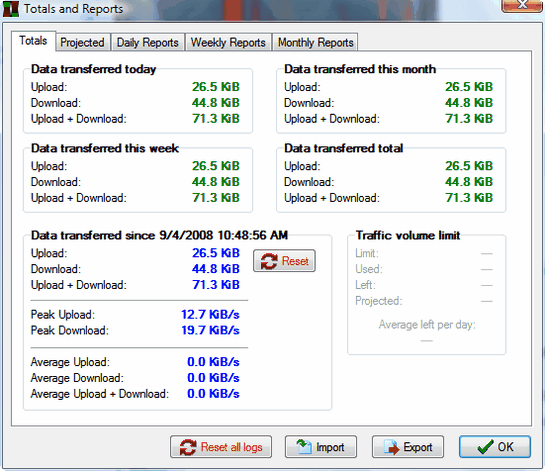 8 thoughts on “How To Monitor Your Internet Usage (bandwidth)”