That’s a great question, and one that’s not always easy to answer. To be fair, hard drive manufacturers have vastly improved hard drive reliability over the years both with standard drives and solid state drives (SSDs), Most hard drives these days are S.M.A.R.T. That does not mean the same thing as it does with smartphones and smart TVs. In the world of hard drives it means, according to Wikipedia, S.M.A.R.T. means:

“(Self-Monitoring, Analysis and Reporting Technology; often written as SMART) is a monitoring system included in computer hard disk drives (HDDs) and solid-state drives (SSDs) that detects and reports on various indicators of drive reliability, with the intent of enabling the anticipation of hardware failures.”

That probably doesn’t mean a great deal to you because all you want to know is… Is my hard drive going bad? Right? So, what you need is a little program that can gobble up all those things that S.M.A.R.T. drives report to Windows, and answer the one burning question:

Is my hard drive going bad?

Do you feel lucky? Well, do ya? You don’t need no stinkin’ luck, I tells ya, if you have this slick little program we discovered this week, by digging deep into the ever increasing pile of freeware out there. To be honest, most of the new stuff is riddled with malware or hijackers or some other type of hooliganism–  or it’s not very good. That does not mean to say that all new freeware is lousy, because it’s certainly not. But the hours you have to spend digging through the heap of new freeware, often is not worth the effort. Not like the good old days when we used to have to make a choice between four or five good freeware programs and the hard part was picking the best of the best to feature in our newsletter.

The author of this program doesn’t have a lot to say and if we sent you to his/her sites, you’d have a hard time finding the right download link. Not because he plays Whack-A-Mole with download links, but because he has a disease called developeritis whereby he things we’re all programmers and we can make sense out of all the version numbers and so forth. So we’re going to send you to a site we have come to trust for download lately, called SnapFiles. The guy who runs the site has been around as long as we have– nearly 2 decades.

So since we don’t have the developer’s rambling spiel to give you, we’re just going to show you a few screen shots, make a few brief comments (REALLY!) and give you the download link… Deal? 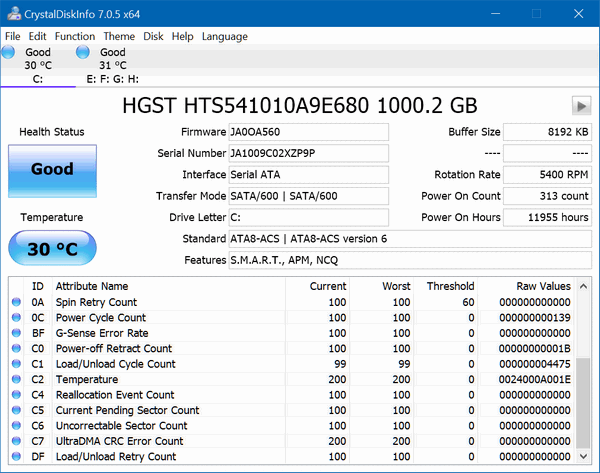 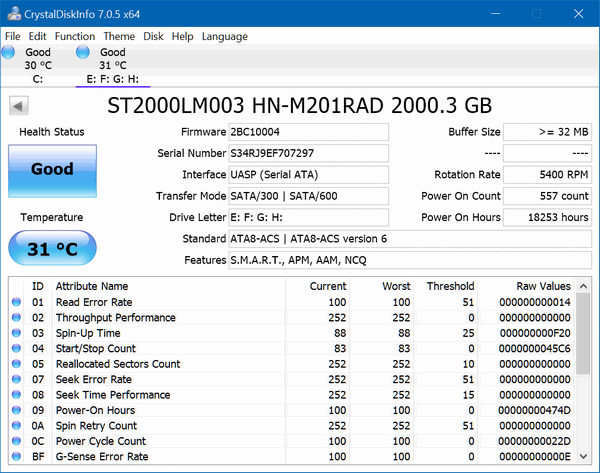 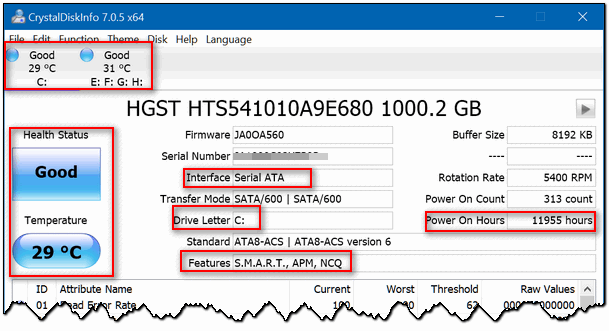 The best part of this program is that you can get a lot of information from just a quick glance. If you want to dig down deep, you can do that too.

And, yes, you over there. The one with the technical manuals who subscribes to 117 tech newsletters and buys every PC magazine published. This program will make you drool with all kinds of arcane information, that only someone who reads reams of technical manuals could appreciate.

And all you computer geeks: This program is a great learning tool. It spews forth tons of info. And if you don’t know what it all means, there’s your old trusty friend named Google who can help you find out and help you learn.

So, no matter what kind of computer you are from nascent to geek, this program, called CrystalDiskInfo has a lot to love. And so, after many words of yammering, I herewith give you the link to CrystalDiskInfo at Snapfiles. There you can also read his short, pithy review, and click the easy to find download link.

May your all your drives be good.

5 thoughts on “How’s Your Hard drive?”