We featured this tip once previously, but as it is a Windows trick we use almost every day, we are going to feature it again. If you’re not using this “middle-click trick”, you’re missing out on a great time saver.

If you have a mouse with a middle button or a scroll wheel, then you have a middle-click option you may not have known about.

We’re going to show you a middle-click trick you will use often..

For this example, we’re going to have you open Notepad, so go ahead open Notepad. If you’re using Windows 10 – type Notepad – in the taskbar search and click on Notepad (Desktop app) when it appears at the top. On any version of Windows, you can open Notepad this way: 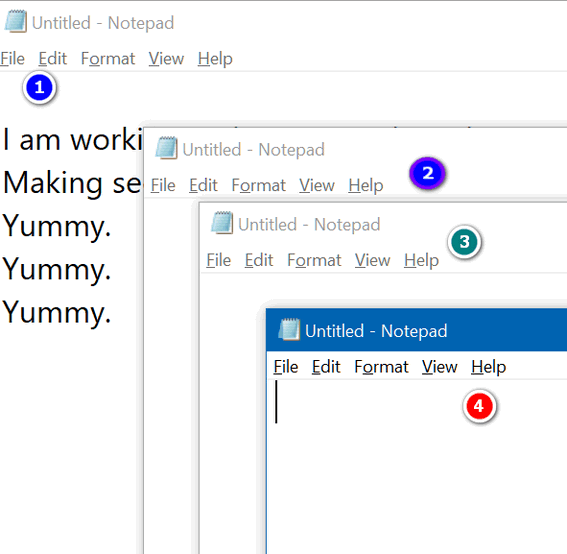 You can see that I have 4 Notepad windows open, I’m working in window #1. By middle-clicking the Notepad icon on my taskbar, I can open as many new Notepad windows as I want. Geeky people call this opening new instances. Take your choice.

This trick not only works for Notepad, but many other programs as well. It will work with any program that lets you open multiple instances. If you have an icon on your taskbar for Chrome, middle-click it – a brand new instance of Chrome will open. Most of you have a File Explorer (Windows Explorer) icon on your taskbar – if you middle-click it, a brand new File Explorer (Windows Explorer) window opens. (Note: You do this with a lot of programs- but not all – as some programs allow only one instance to run at a time.)

If you need to run more than one instance of a program, try the middle-click trick right now. It will save you time.

One thought on “Middle-click Trick: Reprise”