Online Theft and Online Identity Theft: Who are the Biggest Scammers?

You know what makes me so angry I could chew the bark off a pine tree? The supposedly trustworthy companies who use fear-mongering and misinformation to sell you something you don’t need. For example. Every time I hear the Norton/LifeLock commercial filled with half-truths and misinformation, it makes me angry because I know I know there are millions of people out there who are going to willingly fork over their hard-earned money to buy the snake-oil they’re selling. LifeLock – before it was purchased by Norton/Symantec – was sued several times for false claims, and in fact, is currently involved in a class-action suit.

“The law may not authorize the use of light sabers, but to protect consumers and ensure that companies comply with existing orders, the FTC will use the forces within its power. It’s a lock that the agency’s $100 million settlement with LifeLock – one of the largest redress orders of its kind – makes that point as big as life.

“LifeLock’s first go-round with the FTC and 35 state AGs was in 2010. According to that complaint, LifeLock didn’t live up to identity protection claims it made in its ads. To settle that case, the company agreed to secure customers’ sensitive information and promised not to mislead consumers in the future with deceptive claims about its services.

“But as the FTC alleges, LifeLock violated four key provisions of that order…

Now that Norton owns LifeLock, it must think itself immune to the false-advertising laws that LifeLock violated several times. And just think, so many consumers fell for LifeLock’s claims, they were able to continue to pay off lawsuits and still spend millions of dollars on advertising. Then, to put the icing on the cake, they sold out to Norton/Symantec for $3.2 billion.  That just irks me. A company that provably misguided consumers for so long and has been sued successfully so many times, and spread so much misinformation, can still be worth $3.2 billion.

Online theft and online identity theft almost always occur when a user is tricked into clicking a link in an email that leads to a counterfeit site that looks exactly like the legitimate site. And no VPN or security software in this world is going to prevent people from being tricked or bamboozled.

And, unlike legitimate companies out to get your money who use gobbledygook and misinformation to part you from your money, we’re going to give you real information that can save your identity and your money.

Let’s say you get an email from what sure looks like “Netflix”.  Thieves send out millions of these emails hoping to catch some phish. 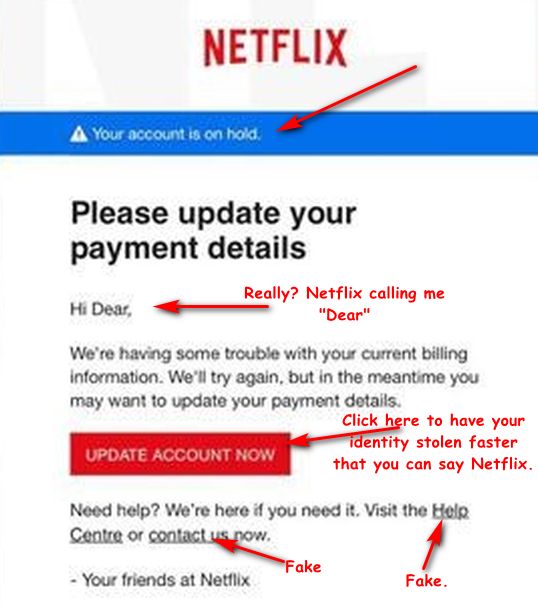 If you live anywhere else in the world other than the USA or one of its territories, you’ll probably not think the U.S. government owes you $9950.55.

But many U. S. citizens fall for this scam every despite all the clues that it’s a phishing scam. First, it’s not addressed to a person. Secondly, you’re never going to get a check from the IRS with an odd amount. In the case of $9950.55 (as below), you’d get $9951.00.  Additionally, the English is very bad… have you ever known anyone to be criminally “indicated”?  But still, many people fell for this scam over the years. They saw only the $9950.55 refund and the “Click here” link which led to a counterfeit government site, where U.S. citizens were easily tricked into giving up all their personal details including their Social Security number.

Cyber thieves send out hundreds of millions of bank scam emails every year – and every time they send these bank scam phishing emails out, they catch a lot of phish. We’re going to try to make sure you’re not one of them.

Any time you get an email from your back that asks you to take action by clicking a link in the email is almost certainly a phishing email scam.  Don’t click links in emails like these. If you think there might be some problem with your bank account – call your bank or go to your bank’s site by typing in its URL in your browser.  Don’t be a victim. Never click links in emails that appear to come from your bank or PayPal or your credit card number.

NEVER CLICK A LINK IN AN EMAIL THAT APPEARS TO BE FROM YOUR BANK, PAYPAL, OR FROM YOUR CREDIT CARD COMPANY. 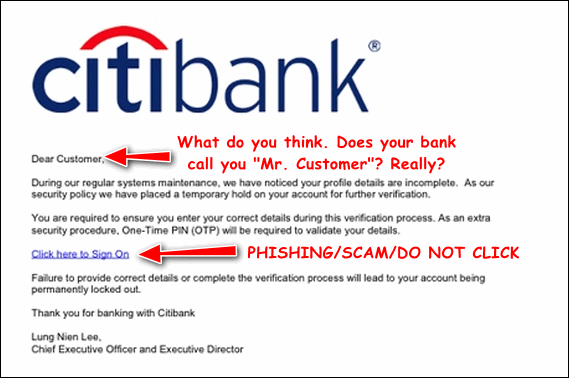 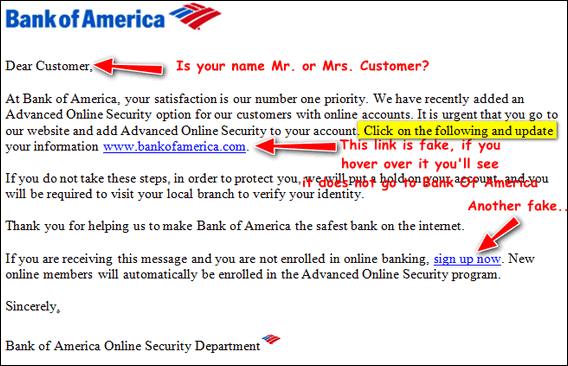 And the Bank of America fake email about reminds me to tell you that even if you see a link that says  www.bankofamerica.com does not mean anything. It’s a fake link that leads to the den of thieves and a counterfeit website. Go ahead, click the link to Bank of America’s site, see where you end up. Don’t worry – we’d never do anything to hurt you. If you click that link you’ll see how easy it is to make it look like a link is legitimate.

All of the examples above, at first glance, look like legitimate emails from legitimate companies, but they’re not. The scammers who send emails like these do not have anything to do with the companies they pretend to be. And I hope we’ve made it clear that phishing emails like these can have serious consequences for anyone who falls for these scams and give scammers their information.

Remember that over 90% of online theft happens because people are tricked into giving up personal information by clicking links in phishing emails.

If you get an email from your bank, credit card company, online store, or other sites that have your personal information, be wary. Never click links in emails from these kinds of institutions. Banks, Netflix, Paypal, Credit Card companies and online shopping sites may send you emails. But they will never tell y0u click a link to verify your information, change your password or check your account to make sure it’s correct. They will tell you to log in to your account – but legitimate sites that involve credit cards, money or highly personal information will never send you an email with a “click here” call to action.

So who are the real scammers, the legitimate companies that spread misinformation and make unsubstantiated claims – or the thieves and criminals who lure prey into their web of deceit? What do you think?

Before we end this… they say a picture says a thousand words. In our effort to protect you from misinformation we close this article with this graphic from the U.S. Federal Trade Commission and the ABA Foundation.

It’s full of good tips and information that will help keep you safe.