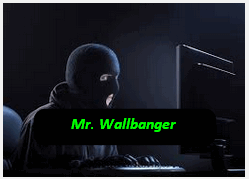 There a common misconception that the average Joe computer user, like you and me, are in grave danger from Rufus Wallbanger, slumped behind his computer somewhere in Eastern Europe, or Moo Choo Wing Wang , somewhere in China, briskly looking for computers to “hack”. But this isn’t how it works.

I’m really reluctant to tell you this, but you are a low value target. No hacker is going to hack into your computer, no matter how important you think you are. That’s not how it works. Mr. Wallbanger and Mr. Wang, or any hacker worth his or her salt, are going to be hacking high-value targets like retail stores, banks, credit card companies, governments, and so on, not you Joe, not me TC, not you Sally. Nope not even EB -she only thinks she’s a high-value target.

So if you’re one of the many who think they’ve been hacked, you almost certainly haven’t been.

The closest most of us will ever get to being hacked is foolishly downloading and installing malware which turns our computers into zombies and makes them part of a botnet or accessible by remote control by hackers. And while Mr. Wallbanger or Mr. Wang may be using hijacked computers to send spam or launch DDoS attacks or steal personal info, they didn’t personally hunt you down and steal your stuff. You’re not a high-value target and neither are we, I’m sorry to tell you.

You are much safer from hackers than I am from EB.

Anyway, back in the Windows 3.1 and Windows 95/98 days, there were plenty of companies making defrag software to help defrag your hard drive. Some were free, some were not, and some were malware.

And back in those days, defragging your hard drives was pretty important, although, I’m sure, not as important as those who were selling defrag software at the time would have liked you to believe.

But folks, this is 2016. Windows 95 is twenty-one-years-old. Beginning with Windows 7, defragmenting hard drives is done automatically by Windows as part of its normal self-maintenance routine. Why, I would dare say Windows 7, 8, and 10 do a better job of maintaining themselves than EB does, but that’s another story.

The fact that beginning with Windows 7, disk defragging is done automatically by Windows, has not stopped purveyors of fine software from pandering to the fears of those who think their hard drives will explode from fragmentation. I assure you they won’t.

And if you have a solid state hard drive, or SSD as it’s known to those who know, you don’t need to defrag at all and Windows is smart enough to know this.  If you attempt to defrag SSDs – YWBS (You Will Be Sorry).

If you’re using Windows 7, 8, or 10 and you’ve installed a utility to defrag your disks, you might want to think about uninstalling. You don’t need it running in the background; you don’t need it at all.

Shutting Off Your Computer

We have gone round and round on this one with many of our readers over the years. But finally, the consensus of those who call themselves experts and those who really are experts, is that shutting down your computer every night is not necessary and my shorten your computers life. Why? Because starting and stopping causes more wear and tear than letting it idle. Plus, when you want to use your computer in the morning you can use it instantly; if you have to power it on each morning, it may take a while before you can use it. But then again, maybe some of you like to use that time to brew a pot of coffee.

Think of this: Do you think Web servers go to sleep at night? Have you tried to google something at 3 AM? Was Google sleeping? Nope. We servers run 24/7/365 and a Web server is nothing but a computer.

There are no good reasons to shut your computer off at night or put it to sleep unless it’s a laptop running on battery power. For desktops, all-in-ones, or laptops which are plugged in, set your display to turn off after 10 to 15 minutes and never put your computer to sleep. You can do this in Control Panel / Power Options.

We know we are going to get raked over the coals on this one, but we’re telling you this causes much less wear and tear on your computer. And if you’re concerned about the cost of electricity – your monitor uses the most electricity – not your idling hard drive. Believe it or not. We’re telling it the way it is.

13 thoughts on “Straight Talk: Stuff You Need to Know”