The Keylogger In Windows 10

There’s a big uproar on Reddit and other sites about a “keylogger” that is built into Windows 10.  A keylogger is generally considered spyware as it logs and record every keystroke on a PC.

The recent commotion is mostly about exaggerated information and hyperbole, including the claim that Microsoft is logging every single keystroke on your computer and, as one writer put it (really!) “…sharing this information with the rest of the world.”

But that being said there is a keylogger built in to Windows 10 – it’s supposedly there to help Microsoft “…improve typing and writing in the future”.

If you don’t want Windows 10’s “keylogger” logging your keystrokes, you can turn it off right now by going to  Settings–> Privacy. Under the “General” tab you’ll see this: 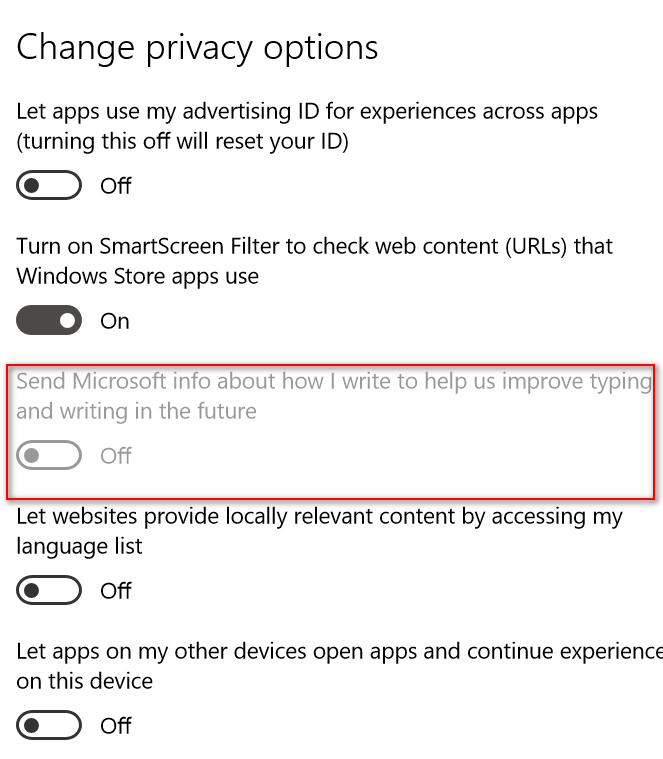 In many cases this setting will be turned off by default and will be “grayed out” as above. If yours is turned on, you can turn it off by using the On-Off switch.

Instead worry about the real threats – like scams, malware and ransomware. Concentrate on being informed and aware so you never fall victim to any of these serious threats to your computer and your privacy.

If the Windows 10 keylogger is an issue for you, it’s easy enough to turn off the “keylogger” if, in fact, you find that it’s turned on. But turn it off for the right reasons. Privacy is important – turning the so-called keylogger off is just one of many things you can do to enhance your privacy if you use Windows 10.

Backup Now! If you wait until you need a backup – it will be too late! Nothing is more important than having good, reliable backups. With Windows 10 being continually upgraded, much of the backup software available needs to be continually upgraded for compatibility. With our new backup service, we don’t rely on any 3rd-party software to create your backup. We can set up your Windows 10 computer to back up your computer using only Windows components, so you’ll never have to worry about backup software upgrades of compatibility issues. That is why we are introducing our new Cloudeight Direct Backup Service with special low intro pricing of just $25.

We’ll set up your computer for automatic, incremental backups of your files and folders and a complete system backup, and more. Once it’s set up, it’s automatic – and you’ll have the peace of mind of knowing that your backups are being automatically done for you.

Get all the details – and LOW intro pricing here.

2 thoughts on “The Keylogger In Windows 10”