Windows has many annoyances. We’ve never owned a copy of Windows (any version) where all functions worked all the time. It seems no matter which version of Windows you use, there are always little nagging errors – not major ones, but little ones – like items missing from the right click menu, or features which are grayed out that shouldn’t be. They are not major errors but they are annoying. Captain Optimizer’s has a feature called “Common Errors” which helps you identify and fix many common errors as quickly as you can click the “Repair” button. Since many of you have been kind enough to help us by purchasing Captain Optimizer ($20 off), we’re providing this tip especially for you.

You probably purchased Captain Optimizer to help keep your computer clean, optimized, and running at peak performance. But Captain Optimizer does more than that. Among its features: A file backup, a disk defragmenter, a RAM (memory) optimizer, a performance adviser, a common a drivers updater, and many more. One of the “many more” features is a Common (Windows) Errors repair tool. And we’re betting that most of you who have Captain Optimizer haven’t even noticed this feature. But it’s a great feature – and easy to use.

If you have Captain Optimizer, fire it up and let’s try it out. (If you don’t? Why not? You can get it here!). Once you’ve fired up The Captain, click “PC Advisor” in the left panel. 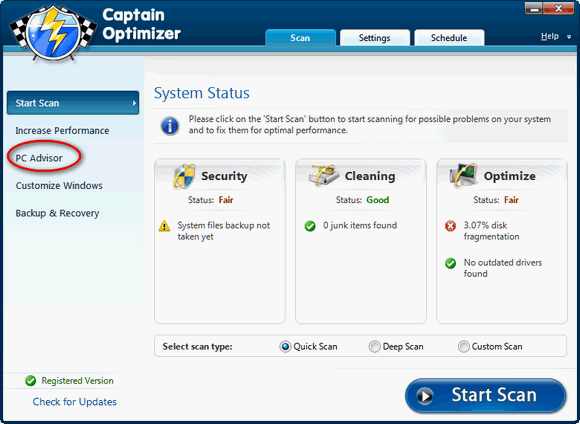 Now select “Common Errors” from the dialog which appears after you clicked PC Advisor (above). 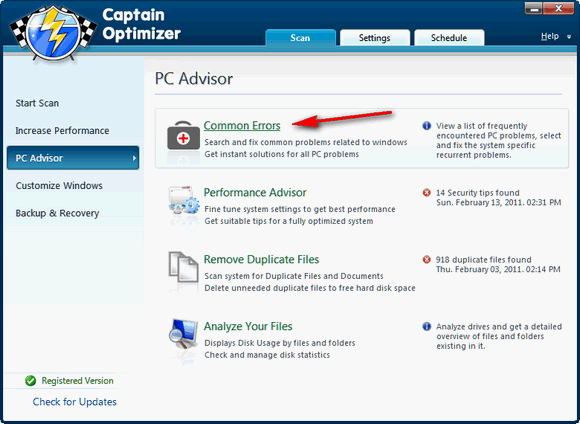 Click “List Problems” in the next dialog. Then in the right-pane, left-column, select each category you want a list of common errors for (Control Panel, Desktop, Explorer, Internet Explorer, Taskbar, Media Player, Windows). As you click each category you’ll see a list of common Windows errors which apply to the selected category. Select the errors that apply to your computer. When you’ve gone through each category and selected all of the errors which apply to your computer, all you have to do is click the “Repair” button and wait while The Captain fixes the errors you’ve selected. 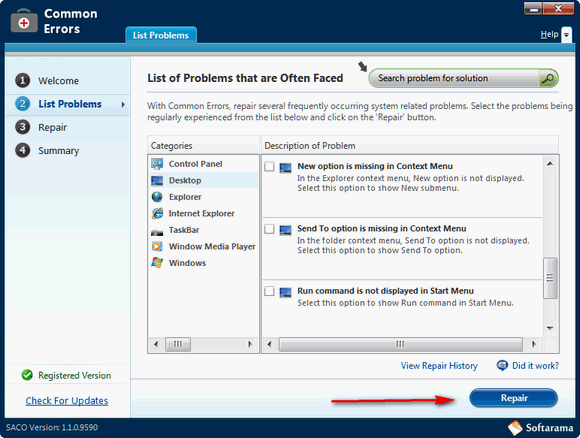 After Captain Optimizer has fixed the errors you selected you might want to click “View Repair History” and see what was repaired. Most of the time, Captain Optimizer can fix these common but annoying Windows errors in just a few minutes. If for some reason something wasn’t repair, click the “Did it work?” button and report your experience to Softarama. And if it worked for you, report that to Softarama too. In our test it fixed all four of the errors we selected. Give Captain Optimizers “Common Errors” repair tool a try. It’s a fast, simple way to correct those nagging little Windows errors most all of us experience at some time or other.

If you don’t have Captain Optimizer and want to learn more about it, visit this page.