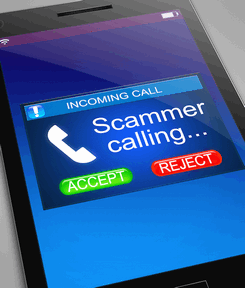 Warning: An Old Cell Phone Scam Is Back

An old cell phone scam is back – and it’s bigger than ever.   Scammers using  auto-dialers, dial hundreds of thousands of cell phone numbers. They use 3-digit area codes that look like U. S. area codes, but they’re not. The idea of the scam is to get the victim to call the number back and keep them on the phone as long as possible in order to rack-up per-minute, commercial charges – similar to the way the old 900 numbers work. Back in the day of the 900 number callers charge per minute rates to for various kinds of calling services such as  astrologer  and party lines.

The three-year-old “One-ring scam” has been joined by two new scams. According to Inc.com, there are now three versions of the original scam.

According to the Federal Trade Commission, scammers use auto-dialers to call cell hundreds of thousands of random cell phone numbers across the United States and let the phone ring just one time before disconnecting the call.

There is no danger in getting the call, the danger in calling or texting back can end up costing you a lot of money.

The area codes used by the scammers look like typical 3-digit U. S. area codes.  but are actually international area codes and with commercial  premium phone numbers. Not only do victims have to pay the basic international calling rate, but also incur minimum or per-minute charges for every minute they’re on the phone. Sometimes, when people call these scammers back, the scammers put them on hold, even play “hold” music in an attempt to rack up more minutes — and more money.

The U. S. Federal Trade Commission summed up the original one-ring scam this way:

Here’s how it works: Scammers are using auto-dialers to call cell phone numbers across the country. Scammers let the phone ring once — just enough for a missed call message to pop up.

The scammers hope you’ll call back, either because you believe a legitimate call was cut off, or you will be curious about who called. If you do, chances are you’ll hear something like, “Hello. You’ve reached the operator, please hold.” All the while, you’re getting slammed with some hefty charges — a per-minute charge on top of an international rate. The calls are from phone numbers with three-digit area codes that look like they’re from inside the U.S., but actually are associated with international phone numbers — often in the Caribbean. The area codes include: 268, 284, 473, 664, 649, 767, 809, 829, 849 and 876.

If you get a call like this, don’t pick it up and don’t call the number back. There’s no danger in getting the call: the danger is in calling back and racking up a whopping bill.

If you’re tempted to call back, do yourself a favor and check the number through online directories first. They can tell you where the phone number is registered.

As the FTC reminds us  – this  one-ring phone scam can ding your wallet. If you get calls like any of the ones described above, you are in no danger of being charged anything unless you call the number back.  We wanted you to  be aware of that the “one-ring” cell phone scam is back.  Don’t let your curiosity get the best of you: Don’t call these scammers back. If you do, you could end up losing money.

We don’t want you to get scammed, we tells ya!

In this information helps you, please considering helping us continue our mission of helping you.

One thought on “Warning: An Old Cell Phone Scam Is Back”