Why You Should Never Click “Check for Updates” on Windows 10 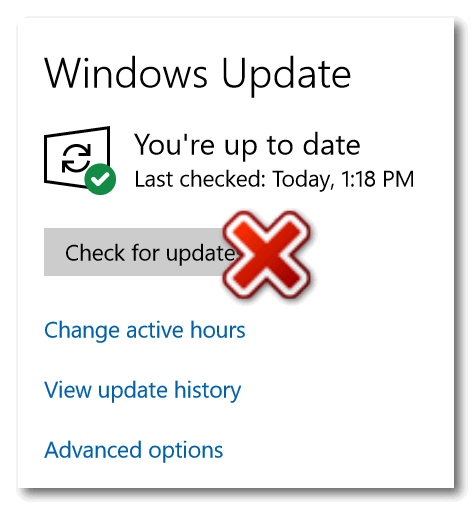 According to Michael Fortin, Corporate Vice President Windows, Microsoft releases Windows 10 Updates on the second Tuesday of each month at 10 PM Pacific time (USA).  He says this:

…Windows 10 quality updates are cumulative and contain all previously released fixes to guard against fragmentation of the OS that can lead to reliability and vulnerability issues when only a subset of fixes are installed. Most users are familiar with what is commonly referred to as “Patch Tuesday” or Update Tuesday. These updates are published on the second Tuesday of each month, known as the “B” release (“B” refers to the second week in the month), and are the only regular monthly releases that include both new security fixes and previously released security and non-security fixes. We chose the second Tuesday at 10:00 a.m. Pacific time to give commercial customers plenty of time to test the updates and deploy them to devices…

What he’s saying is that the updates you get on “Patch Tuesday” – the second Tuesday of each month are called “B” releases and we’ve all been getting them as long as we’ve been using Windows.

But what about “C” and “D” releases? What are they? Well,  they’re basically for commercial customers and advanced users to test new updates to see if they cause any major problems – i.e. beta updates. If they don’t, they’ll be included in the following month’s “B” updates (the ones we all get).

Fortin explains (bolded text is ours):

“…We also release optional updates in the third and fourth weeks of the month, respectively known as “C” and “D” releases. These are validated, production-quality optional releases, primarily for commercial customers and advanced users “seeking” updates. These updates have only non-security fixes. The intent of these releases is to provide visibility into, and enable testing of, the non-security fixes that will be included in the next Update Tuesday release (we make these optional to avoid users being rebooted more than once per month). Advanced users can access the “C” and “D” releases by navigating to Settings > Update & Security > Windows Update and clicking the “Check for updates” box. The “D” release has proven popular for those “seeking” to validate the non-security content of the next “B” release.

So what all that means is this:  If you go to Settings > Update &  Security > Windows Update and click “check for updates”, you may get not-ready-for-prime-time, pre-release updates installed on your computer. You’ll get no warnings or notifications that clicking “Check for updates” may install pre-release (code words for “test versions”) updates.

No wonder people get weary of Microsoft’s ways. They should at least notify users that clicking “Check for updates” may install “pre-release” (beta) versions of updates on their computers. Along with a notification they should make a setting available allowing allows users to block all pre-release updates when they click “Check for updates”.

We realize that there are some Windows user who want to get the newest updates as early as they can, and are willing to take the risks associated with doing so. But most Windows users don’t want Microsoft user their computers for test machines and installing pre-release updates when they click “Check for updates”.

As of now, if you click the “Check for updates” button, you risk installing pre-release (beta) updates on your system. So our advice, unless you’re one of those who is willing to take the risks to get updates as soon as possible, is never ever click “Check for updates”.