You Can Have Fun with the Run Box

We call a Run command a Run box – because we’re not geeks. And most of you know that you can open a Run box by pressing the Windows Key + R. But did you know that when you open a Run box, you open up a world of commands. And just seriously complex commands made for geeky people. Many are for normal folks like you and me… and the ones we’re going to show you may come in handy. 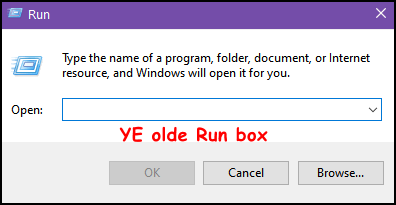 Did you know that you can open programs or web pages from a Run command?  You can open folders and run Windows commands as well. The Run command is not just for geeks in dirty sweatpants sitting around in dank, musty basements surrounded by computer screens, and billows of e-cigarette smoke. The Run command works for ordinary folks too — and we are going to prove it to you.

Use the Windows Key+R keyboard shortcut to open a Run box. Type the name of a program in the Run box and press Enter. For instance, try typing Chrome and then tap the Enter key. If Chrome is installed, it will open. You can try other programs too, but keep in mind, If the program does not open, some programs require you to be a geek and type in file path too.

And remember,  you can also enter a URL (Web page address) directly into a Run Command and open any webpage in your default browser.