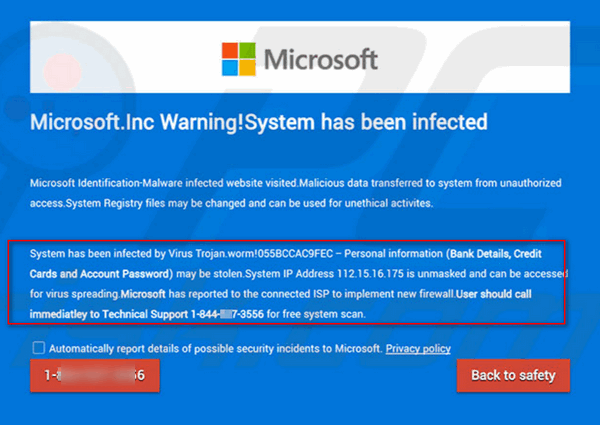 Above: A fake Microsoft popup warning of an infected system; a favorite trick of scammers.

One of the most difficult things we have to deal with is when one of our readers falls for one of the many tech support scams that are ubiquitous on the Internet – the one we most frequently help people with is the Microsoft support scam where the victim either gets a phone call from someone claiming to be Microsoft and making them believe their computer is infected or spreading spam or malware – or when a popup window appears on their screen urging them to call a toll-free number because there computer is full of viruses and malware.  Every week we get frantic emails from people who’ve been duped by these scams.

We’ve warned people many times about these kinds of  tech support scams and written many articles about them. For instance:

According to an article on the BBC website, these scammers were making over $1 billion a year by claiming to be employees of Microsoft and other computer related companies.

We cannot emphasize this enough:

THE MORE YOU KNOW THE SAFER YOU’LL BE.

More than 50 people have been arrested in India for their alleged involvement in fake security warning scams.

The New York Times said that Delhi police made the arrests during raids on 26 call centres linked to the scams.

Software giant Microsoft helped police trace who was behind the large-scale operations.

It said it received more than 11,000 calls per month about fake security warnings and that many people lost significant sums to the fraudsters.

‘This is an organised crime,’ Courtney Gregoire, an assistant general counsel in Microsoft’s digital crimes unit told the US newspaper.

Microsoft has estimated that fraudsters make about $1.5bn (£1.2bn) a year through fake Windows support calls.

Raids on 16 call centres were carried out this week and, earlier in November, another 10 locations were visited by police.

The raids were prompted by Microsoft filing complaints with local police in New Delhi about call centres it claimed were involved in the fraudulent operations.

Typically, said Microsoft, attempts to trick people revolved around pop-up warnings that falsely claimed that a person’s computer was infected with a virus.

Fixing the non-existent virus could involve ringing a tech support centre. An operator would talk a victim through a fake fix and then charge them for the work.

In another version of the scam, staff at call centres claimed to be calling from Windows official support saying they had spotted that a person’s computer has been hacked or harboured a virus. Again, victims were expected to pay to fix the non-existent problem.

Some people caught out by the scam paid up to $1,000 for the fake tech support, said the newspaper…

Read the rest of this article here…

And also this from the New York Times website:

That Virus Alert on Your Computer? Scammers in India May Be Behind It

MUMBAI, India — You know the messages. They pop up on your computer screen with ominous warnings like, “Your computer has been infected with a virus. Call our toll-free number immediately for help.”

Often they look like alerts from Microsoft, Apple or Symantec. Sometimes the warning comes in a phone call.

Most people ignore these entreaties, which are invariably scams. But one in five recipients actually talks to the fake tech-support centers, and 6 percent ultimately pay the operators to “fix” the nonexistent problem, according to recent consumer surveys by Microsoft.

Law enforcement authorities, working with Microsoft, have now traced many of these boiler rooms to New Delhi, India’s capital and a hub of the global call-center industry. On Tuesday and Wednesday, police from two Delhi suburbs raided 16 fake tech-support centers and arrested about three dozen people. Last month, the Delhi authorities arrested 24 people in similar raids on 10 call centers…

Read the rest of this article here…

Donations help us continue our mission to keep you informed, separate the truth from the hyperbole, and help you stay safe online. We provide support to thousands of people; every week we help dozens of people via email at no charge. Thanks to  your donations, we do a lot more than provide our free newsletters. We help you recognize online threats, scams, protect your online privacy, and provide you with the knowledge that can greatly help you navigate the Web  more safely. We help you get more out of your PC.

Help us keep up the good fight with a small donation.

After you donate, you will receive an invitation to become a Cloudeight Booster.

Interested in making a monthly gift? Visit this page. Help us keep helping you!

Thank you so much for your support!