Well what can we say? Hmmm. Until today, I hadn’t tried Gimp since 2006 and frankly I wasn’t impressed. The user interface was so fragmented, with parts of the program scattered over most of the screen, I couldn’t figure out what did what, and therefore we never recommended it or even used it.

But everything changes over time. We all benefit in some way from the passing years, even if we don’t think we do. I tried Gimp today and was very impressed with the changes they’ve made. I was astonished by number of filters available for Gimp and some of the improvements with its Alpha layering capabilities, as well as its improved user interface.

For those of you who’ve always wanted to try Photoshop but didn’t have $600 – or those of you who screamed when Corel bought Jasc and Paintshop Pro, and who hold on to your dear old Photoshop 7 (the last GOOD version of Paintshop Pro from Jasc) as if it were a precious gold coin, we think you’ll like Gimp. The user interface is not exactly as good as it could or should be, but it’s usable – and the features Gimp includes surpass Paintshop Pro by a huge amount.

If you’re a casual user, Gimp probably would be overkill – but not as much as paying $600 for Photoshop or $100 for Corel’s current version of Paintshop Pro would be. But if you’re serious about image and photo editing, you won’t find any free editor better than Gimp. We have to be honest, you’re not going to download, install it, and start using it to create dazzling images or edit your digital photos to create award-winning images. But if you have used Photoshop or Paintshop Pro you’ll be able to do some things right away – and with some patience and practice, there isn’t anything you can do with Paintshop Pro or Photoshop that you can’t do with Gimp. If you’re really patience, you’ll be glad to know that Gimp plans on releasing a brand new version at the end of 2011 which promises to make the user interface much simpler.

Finding something to include here from the developers help me understand why the user interface is still a bit fragmented…I think the developers are a little fragmented to. Anyway, here are a couple of outtakes from the official Gimp Web site:

GIMP is ideal for advanced photo retouching techniques. Get rid of unneeded details using the clone tool, or touch up minor details easily with the new healing tool. With the perspective clone tool, it’s not difficult to clone objects with perspective in mind just as easily as with the orthogonal clone…”

If you know what orthogonal clones are without looking it up, you’re light-years ahead of me – you probably need to spend $600 on Photoshop. If you don’t know, then you’re with me and you’ll probably like Gimp, if not for its interface, for its features and functionality. (EB will you quit asking me what orthogonal clones are. I don’t know. OK! OK! I’ll look it up! Darn you are such a nuisance sometimes. “Orthogonal clone implies you’ve created a new instance and copied the attributes…” Are you satisfied, EB?

So if you’re a casual editor of photos and images and you just want to resize images and maybe change the contrast or enhance colors – you’ll be biting off more than you can chew with Gimp. But if you’re used to using – or have used Paintshop Pro and/or Photoshop, you’ll find Gimp a feature-full, professional editor. If you’re interested in learning advanced photo editing techniques or in creating or editing digital images, Gimp has a every tool you’ll ever need to start learning professional graphics editing. 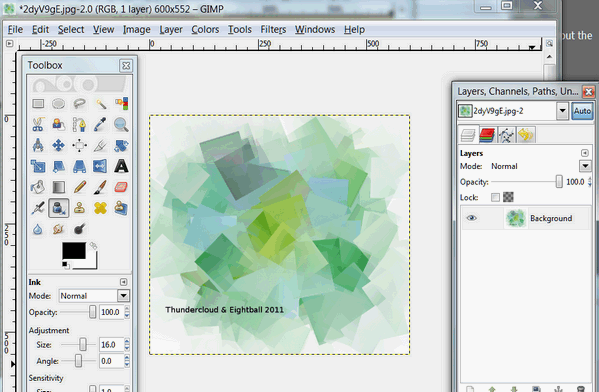 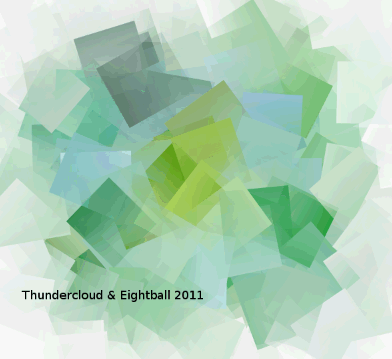 The image above, while not a work of art, was created from a photo of a white flower on a green stem. It took maybe five minute of playing around with Gimp’s menagerie of filters to create that cubist abstract. We don’t think it will be in in any art museum soon, but it’s quite interesting to think it started out as an ordinary white flower. Well, it may just show how really dull our lives are too 🙂 We’re selling autographed copies – if you’d like one let us know. Hey! We said times were tough… (Kidding!)

If you download Gimp, you’ll want to be sure to take a look at the hundreds of interesting plugins and filters offered for Gimp from their Plugin Registry at http://registry.gimp.org/ .

So EB and I are off to create some orthogonal and non-orthogonal clones, and split a peanut butter and jelly sandwich for lunch. (Well, have you seen the price of peanut butter lately?). While we are savoring our halves of the sandwich, you can savor Gimp by reading more about it from http://gimp.org or downloading it from http://downloads.sourceforge.net/gimp-win/gimp-2.6.11-i686-setup-1.exe

Hey EB, you have more jelly than I do! Not fair!

The details you seek: