According to an NBC News report on Monday, Webroot Antivirus mistakenly labeled important Microsoft Windows system files as malware threats and removed them thus causing an untold number of PCs to shut down.

Webroot acknowledged that it had released an update which caused the Windows system files to be removed from PCs. The virus definition file that caused the problem was live for 13 minutes, but apparently, that was long enough for a substantial amount of damage to be done.

According to NBC news, as of early Tuesday (4/25/17), Webroot was still working to resolve the problem, according to information on the company’s website.

Here’s some additional information from Liliputing:

Unfortunately on April 24th, a Webroot update mistakenly flagged hundreds of Windows system files as malware… causing many computers to stop working. The company says the bad virus definitions were only live for a brief time, but that was long enough to do a lot of damage. And while Webroot has posted instructions to help some home users and business customers undo the damage, many users in the Webroot community forum say the instructions don’t work for them.

NBC says that Webroot didn’t respond to its request for comment. NBC reports that Webroot posted on its website that company “has not been breached and customers are not at risk.” When we checked Webroot’s website a few minutes ago,  we didn’t find any acknowledgement of any problems, in fact, all looked to be business as usual.

If  some Webroot customers had their computers bricked by a trusted Webroot update, then neither the PC owners nor the hackers can access them. Well, I guess that’s one way of protecting PCs… brick them so no one can use them! 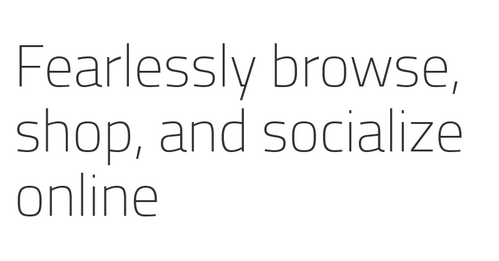 The screenshot above was taken from Webroot’s web site. Fearlessly, indeed!

All kidding aside, if you’re using Webroot and you were affected by this, we’re sorry you had to endure this – it should have never been allowed to happen.