This is NOT freeware for the faint of heart!

This freeware program is not point-and-shoot-easy. It’s not install-and-use-easy. It will take you a while just to figure out how to use its basic features —  and a very long, long time to learn how to use all its features. That being said, it’s free and you have as long as you need to learn it.  All you have to have is a lot of time to and the desire to learn. So… if you love a challenge, one that will be worth the time and trouble in the end, then DigiKam might be just the photo manager extraordinaire you’ve been looking for.

I’ve been using DigiKam for over a week now, and while I know a whole lot more about the program  than I did a week ago, I realized today that I have barely scratched the surface. It has far more features, functions and options than I’ve had time to discover, and far more I will probably ever use. But if you’re looking for a very powerful photo manager, organizer and editor,  you may find DigiKam worth the time and effort it will take you to learn it. It’s not at all intuitive and it’s not for you if you need something you can install and learn in a few minutes.

DigiKam is a complete comprehensive package. You can import you images into the program in several different ways. You can organize your photos into albums. You can browse through you collection by location, time, tags, faces, more. You can edit your photos, retouch them and add professional effects with DigiKam’s powerful built-in photo editor. You can create calendars, build panoramas, create slide shows and videos, save your photos and your creations  or share them via an impressive list of social media and online services.

DigiKam is a powerful image management program that focuses more on helping you search and organize your photos than it does on editing them. However you’ll find the available editing tools far superior those of Google’s old Picasa program or Windows Photos. For instance, when you click on the “Color” menu,  you’ll have many options including: “Auto-Correction”, “Brightness/ Contrast/ Gamma”, “Hue/ Saturation/ Lightness”, “Color Balance”, “Levels Adjust”, “Curves Adjust”, “Invert”, “Color Negative”, “Black and White”, “Channel Mixer”, “White Balance”, “Depth” and “Color Space Conversion” – and each of those have many sub settings and sub-options available to you also.

The program has far more positives than negatives, but we need to mention the negatives. As we said, it’s not a point-and-shoot, open-and-use kind of application. It will take you a long time to learn. It will take you time just to learn some of the basic features – so if fast and easy is on your list, you can scratch this program right now.

DigiKam was not originally designed for Linux, not for Windows, so some of the interfaces may seem strange to Windows users. But the Windows version works well on Windows 7, 8.1 and Windows 10.  The fact that it has such a huge number of options, features and functions can be aggravating when you’re looking for a particular feature, option or function. But, again if you’re willing to take the time and put in the effort, you may find this program to be one of best of its genre. 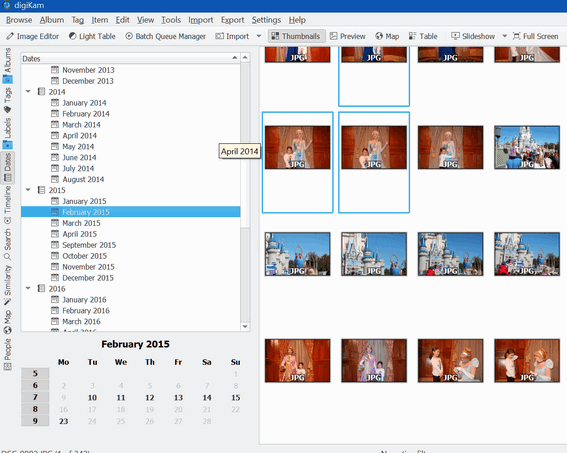 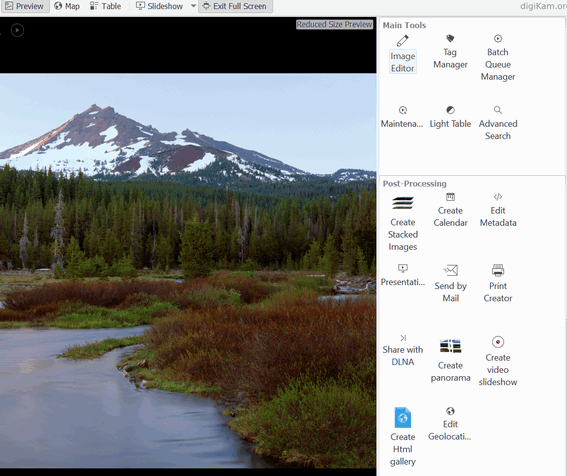 Above: Screenshots from our DigiKam tests.

And now… some words from the developer:

The following is a concise overview of features and tools available in digiKam. The application covers the photographic workflow consisting of five major stages:

Import photos, raw files, and videos
Organize your library
Browse and view items in the library
Process and edit raw files and photos
Share and publish photos
Import
Support for all digital camera models that work with Gphoto2

To ease development and to share code with other applications, digiKam make use of plugins architecture.

Other tools available in digiKam core

Features available in Image editor are:

Vignetting : a tool for removing or adding vignetting on photograph

Channel Mixer : a tool to mix the photograph color channels

Photograph Refocus : a sharpness editor to refocus a photograph

Free Rotation : a plugin to rotate a photograph with a free angle in degrees

Shear Tool : a plugin to shear a photograph horizontally and vertically

Perspective Tool : a plugin to adjust the photograph perspective

Add Border : a tool to add decorative frame around a photograph

Insert Text : a tool to insert text under a photograph

Apply Texture : a tool to apply a decorative texture to a photograph

Solarize : a tool to solarize a photograph

Rain Drops : adding the visual effect of raindrops on photograph

Ready for challenge? You can read more about and download DigiKam for Windows here.

3 thoughts on “DigiKam – Photo Manager, Editor, and Much More”