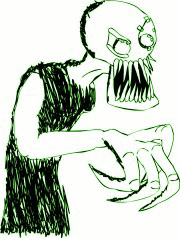 Don’t Be Afraid of the Bogeyman

But the bogeyman has returned to haunt all of us grown-ups. The bogeyman is back and is out there hiding from all of us Internet users – and now that we’re all grown up it’s not likely we’ll outgrow him this time.

You know what? The truth is he’s no more real now than he was when you were a kid, but if you listen to and read what people are saying, you’d think the bogeyman was everywhere.

The Bogeyman of the Internet
More and more people are blaming more and more things on “hackers”. “Someone hacked into my computer!” “If you don’t use our firewall you’re leaving your computer open to hackers! “Your personal information is at risk! Buy our security software today! A $19.95 investment today could save you thousands tomorrow!” “Hackers steal millions of credit card numbers.” “Someone hacked my computer! My files are missing!” “I’ve been hacked!”

Hackers. It’s just another name for the bogeyman.

You’ve seen the headlines, you’ve heard the talk, and you’ve seen the sales pitches. Everything that’s wrong with the Internet gets blamed on hackers. Hackers are responsible for very little of what they’re blamed for. Yet supposedly savvy tech writers misinform the public all the time; it’s no wonder everyone is confused.

Your PC is about as likely to be hacked by a hacker as you are likely to win millions in a lottery. As far as the scare tactics vendors use, they’re shameful. A firewall isn’t going to stop a hacker even in the highly unlikely event a hacker would target your computer in the sea of billions of computers. Want proof? Google’s servers are protected by highly sophisticated hardware firewalls – the best money can buy – yet Chinese hackers (and these were really hackers) wreaked havoc on Google’s servers in China.

However, scaring people, unfortunately, is an effective way to big profits. You’ll buy software to protect you from “hackers” if you really believe you’re at risk, But that the software you’re buying will never really protect you from “the bogeyman”.

Scaring people with sensational stories about the risks you face from hackers surely gets attention and it does lure people into subscribing to newsletters and forums.

There is no denying it. Scaring people sells. It’s unfortunate, but it’s so very true.

And nothing scares more people than the ethereal bogeymen we call “hackers”. After all most of us grew up afraid of the bogeyman. We all outgrew him, but now he’s back again, with a new name: Hacker.

Like the bogeyman, hackers seem to be everywhere. Instead of under the bed or in a closet they hide just beyond that next click or in some dark corner of a new Web site you are visiting. But like the bogeyman who was never really hiding in your closet or under your bed, hackers don’t hide under the next link or on that new Web site.

Hackers are not going to waste their time picking your pocket – they’re going to pick the pockets of those they know for sure that could make them rich.

Unlike the so-called tech, gurus would have you believe, it takes time, intelligence, perseverance, and desire to hack something. If you were a hacker who would you hack? Wells Fargo Bank or Mildred L. Miller?

Your credit card numbers are much more likely to be stolen because you give them away than because a hacker broke into your computer and took them. You’ve got about a one in a billion chance of that happening. Your chances of being struck by lightning, conked on the head by a falling meteorite, or dying from a cold, are all far greater, yet people spend billions of dollars on firewalls and other security software because they are afraid of hackers and think some security software program or firewall can keep them away from the bogeyman.

And most of the time, credit card numbers stolen from large companies are stolen because someone was tricked into giving the keys to access their systems, or by sheer carelessness, not hackers.

Not by the bogeyman.

No doubt there are a lot of hackers. No doubt they’re up to no good. But if you’re a hacker and you’re good at what you do, you’re not going to waste your time searching a billion computers connected to the Internet trying to find one you can hack.

You’re going to go after well-known targets, high-profile, high-value targets -companies where you know there’s going to be something of great value to steal. Something worth the risk.

You’re certainly not going to seek out Mrs. Johnson’s computer and waste your time going through hundreds of photos of baby Lucy or grandson Mike, hoping to find a few hundred dollars stashed away on in some online bank account. Even then a hacker would still have to hack the bank account to get to those few hundred dollars. Hackers are not stupid. Why would they take the long way around?

There are lots of dangers on the Internet: Malware and ransomware top the list. But there are still viruses, bots, Trojans, and worms too.

Malware, rogues, and ransomware all function differently – there is no one set pattern of behavior to detect and that’s what makes them so ubiquitous and hard to detect and remove.

You’re more likely to give a cyber-criminal what he wants than he or she is of taking it from you. Don’t click links in an email if you’re not sure who sent it. Banks and financial sites will never send you an email asking you to click a link to “update your account” or change your passwords. They may send you an email asking you to log in to your account and take some sort of action, but they’ll never say “Click here to change your password” or “Click here to update your account”. If you click links in emails such as those, nine times out of ten, you’ll end up on a counterfeit site that looks just like the official site – and if you enter your username and password on that counterfeit site – you just gave a criminal your username and password to your bank account or other personal accounts. Don’t do it.

Update your passwords frequently. Never use the same password for more than one site. Always use strong passwords. Use a good anti-malware/antivirus program. And most importantly, use good common sense. Always be wary and alert. Educate yourself about the Internet, and your Windows computer, and make sure you have at least a basic understanding of how things on the internet work.

Don’t be scared! Be Smart!

Don’t believe in bogeymen. Don’t be scared, be smart! Go buy a lottery ticket. Your odds are much greater of winning the lottery than they are of being hacked. Don’t waste your time worrying about the bogeyman – leave him where he belongs – hiding in the closet of your childhood.

3 thoughts on “Don’t Be Afraid of the Bogeyman”