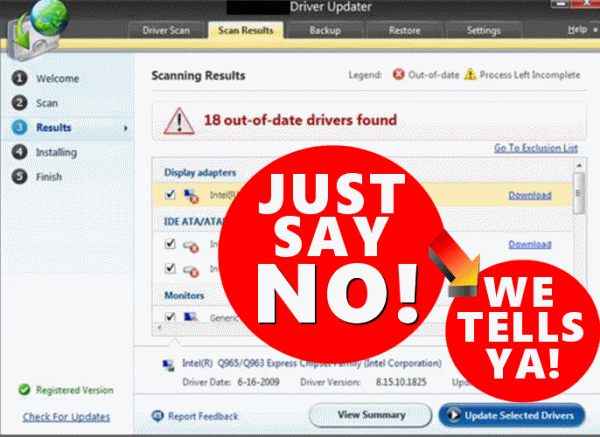 Consider this a reminder from your old pals, TC & Darcy…

Both of these people had were experiencing some serious Windows problems. And what do you think these two computers had in common? They both had driver updater programs installed.

So, we just wanted to remind you all to check your installed programs for any driver updater programs and if you find one (or more) uninstall them before they start causing you big-time trouble.

Darcy and I have been using Windows since Windows 3.1 (yes, there was such a thing), and we can’t ever remember a time when driver updater programs were ever necessary. And we can tell you that Windows was pretty bad back in those days. Every time we got up in the morning we held our breath until Windows booted. And back then you couldn’t leave your computer running because it would succumb to memory leaks. Those days are gone thank goodness.

We can tell you this too:  driver updaters have been among the most often downloaded and install programs – and rank high among the most useless programs you can install on your Windows computer.

But before we go any further, we want to point out we are talking about 3rd-party driver downloaders that you download and install. A new computer oftentimes has a lot of driver updates recommended by the manufacturer (updates done with the manufacturer’s software) and that you should let those update when first getting a new computer as many computers have been on the shelf for weeks or months. Also, Windows Updates may update critical system drivers. We are not talking about manufacturer or Windows updates, we are talking about 3d-party driver updater programs. We wanted to make sure we pointed this out before we go any further.

You don’t need a third-party driver updater program to tell you that you need a new driver. The only time you ever need to update a driver (or drivers) is if a hardware device (printer, sound card, etc.) is not working correctly or the manufacturer recommends an update. Installing new drivers just because new drivers are available is unnecessary and can be – and often is – a recipe for disaster.

If you have a hardware device that is not working properly,  you can download the correct driver from the device’s manufacturer’s website. Just make sure you know the version of Windows you’re using and the name/model of your printer or hardware device. Then go ahead and download and install the correct driver directly from the device manufacturer.

If you’re not having any problems with your hardware devices there’s no reason to update your drivers not even if new drivers become available.

Remember these two nuggets of sage advice from both of us:

Be smart and leave driver updaters alone. And if you find one has sneaked onto your computer via those nefarious software bundles that are all too common these days — or you were tricked into installing a PUP or malware —  uninstall the driver update with mucho alacrity… we tells ya!

Please help us to keep on helping you. Make a small donation today.