I tell you what, when it comes to smart close, you can’t beat EB. You should see her new spring house dress! Now that looks smart; a snappy dresser is she. Oh, did we misspell clothes? Sorry…

There are times when you need to install an important program – and you need to make sure that it installs correctly – that means taking no prisoners – er I meant taking no chances. If you have an important program to install, like say a new antivirus program, MS Office, or some bloated Microsoft program, it’s best to close all running programs so that you don’t get halfway through the installation only to get a message that such and such file is in use and the installation program will now close. This is bad. Real bad. Sometimes installers won’t rollback the stuff they’ve installed leaving debris lying around inside your pristine computer. Not good at all.  Plus, it wastes your time.  In fact, most program installers recommend closing all running programs before running it. It’s wise advice to heed – but not for every program but for those large, intensive programs which will be installing lots of dlls and other files and making changes to your system configuration – such as anti-virus software, anti-spyware programs, office programs, security suites, and the like.

Another reason you might want to run SmartClose – it will make your system shutdown time faster. Windows has to close all running programs, tasks, etc. before it can shut down. This is irritating when you just want to reboot – and you have to wait for five minutes for Windows to shut down. What do you think Windows shows that “Windows is shutting down…” screen for? It’s covering up its dastardly deeds – shutting down stuff that is still running. Using SmartClose to close down all running programs give your shutdown a boost. Windows won’t have so much to worry about – you’ll be helping out!

Before we go off on yet another InfoAve tirade, we’re going to bring the developer in to bring logic to this disorder and to explain his program concisely and clearly as only a developer can do. OK Mr. Developer, take it away, dude:

“Many tasks that can be performed on PC’s these days require you to close all running programs. For example, almost every installer asks you to close all other applications to minimize conflicts and to avoid replacing in-use files. Other high-end tasks, such as burning CD’s and defragmenting or scanning hard drives can slow down or even fail when other processes ‘kick in’, like background programs, the screen saver or a scheduled task. Of course, you can manually exit each program one by one, disable the screen saver… That is when SmartClose comes in! Smart Close will automatically close all running programs, disable the screen saver and halt all other processes that can interrupt without asking. But what when you have finished the task that required you to use SmartClose and you want to restore the programs and such that were disabled by SmartClose? Restart the computer? No, because before SmartClose closes or disables anything, it will first save the current state of the system (running programs, screen saver…) to a ‘system snapshot’, that can later be opened and restored again by SmartClose….” 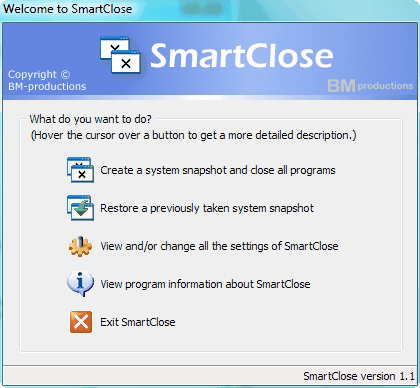 SmartClose has many other features too. If you’re interested in learning more about all of the features of SmartClose or you would like to download SmartClose- visit the SmartClose Web site. It’s a terrific little program – and a very useful one too. That’s why we’ve chosen SmartClose as our freeware pick of the week.

On x64 (64-bit) versions of Windows, SmartClose will not be able to retrieve the command-line arguments or working directory of 64-bit processes, nor will it be able to kill these processes. Lucky for you – you don’t have many 64-bit programs because there aren’t that many available.

Another limitation is that the current version of SmartClose doesn’t properly recognize Internet Explorer 7 (or higher) windows containing multiple tabs. Such windows will be closed, but only one of its tabs will be saved to the snapshot and restored. On Windows Vista, SmartClose will not be able to see Internet Explorer windows at all if User Account Control (UAC) is enabled.

SmartClose
Windows XP, Windows Vista, Windows 7
32bit and 64 bit*
What is it? A program to kill all running programs
Download size: 629 KB