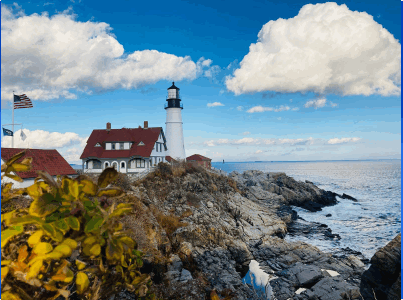 In the late afternoon, on so many summer days, the old man would sit with me in still silence. Clouds scattered and majestically moving crossed the sky as I sat on the rocks, fishing pole in hand, waiting and waiting for a fish to bite. The smell of the old man’s pipe was pleasant. The aroma mixing and swirling and waning in the pleasantly scented sea breeze that blew in off the lake.

The night was coming – we both knew it. But neither of us said a word. The sloshing of the waves against the rocks and the seagulls swirling above our heads were the only sounds as the long summer day came to an end.

Another day in the life of a little boy in what would become the summer of dreams at the lighthouse.

The darkness seemed to crawl like a huge silent shadow across the gentle swells as the sunset tinted them a strange red-orange. Along the rock edge, the foam of a billion way ebbed and flowed in slow motion.

The house was small but homey; its decorations were functional and sparse. Looking back I would call it comfortable and cozy. In the corner, was a black pot-bellied stove, that would become the only source of heat during the harsh and wild winters that the would too often sweep down from the north and lock the lighthouse and its keeper in a seemingly endless ring of ice as the house was pummeled by frequent winter gales.

Next to the living room was a tiny kitchen with a small, undecorated, wooden table, and an ancient stove, and a small refrigerator. Off the kitchen was a small, bathroom with a sink and a shower stall. It was painted a dull green color and begged to be repainted.

Upstairs were two small bedrooms, sparsely decorated, one containing a small brass bed and a white, ladder-back wooden chair. The other bedroom had a large bed made of oak with a massive headboard with an intricate pattern that looked like it had been hand-carved. In the room were two chairs, one a small wooden chair, the other a large upholstered chair. Beside the large chair was a small table with an ashtray, a book, and a small table lamp

When I visited that summer, I slept in the room with the small brass bed. The lone window in the room had a small window facing each from which I had a view of the lake and, on clear nights, I could see the lights of Catawba twinkling and blinking in the night. Many nights the lights disappeared in the fog.

That year the lighthouse’s lamp was automatic. It automatically turned on and off, but as the old man told me, for many years, every evening as the sun slowly set, he would ascend the spiral staircase inside the lighthouse, to the glass enclosure that housed the light and its reflectors, and manually flip the switch to turn on the light that guided sailors safely into the narrow channel and away from the sandbars and rocky reefs and shoals.

Also attached to the lighthouse was a foghorn. The foghorn was an extremely large metal horn that looked like a huge megaphone that when operating, would slowly spin 360 degrees so its sound could be heard in all directions. The foghorn emitted a loud distinctive mournful sound to warn ships when visual navigation aids such as lighthouses were obscured. The foghorn provided an audible warning of rocky coastlines, shoals, sandbars, and other dangers to shipping in foggy conditions. Now with GPS and other computer-controlled navigation aids, foghorns and lighthouses have only a place in my nostalgic yearning for a simpler time.

And the old man was still in control of the foghorn. He determined when its woeful sound should be blasted in all directions to keep ships safely away from the dangers that were hidden by the fog.

It has been decades since I spent three weeks of my summer vacation at the lighthouse on South Bass Island – also known as “Put-in-Bay”. The old man was my great-grandfather. He’s been dead for more than sixty years.

When I remember the weeks I spend on the island at the lighthouse, I think how much humanity humanity has lost. I often wonder how much inhumanity we now experience because we’ve allowed machines to replace so many things that people used to do.

And now, with artificial intelligence creeping slowly into every aspect of our lives, I wonder if the world is turning into a lighthouse… and sooner or later people won’t be needed – or wanted at all.

And thinking back on my boyhood and the summer weeks I spent at the lighthouse, I remembered a poem I wrote, also called “Lighthouse”.

It is not easy to weather love’s storms,
Nor is it easy to sail on its sea.
It’s hard to tell by the clouds that it forms
What kind of day those clouds will bring me.

Sometimes in anger, I set off to sail
Out on the ocean without a first mate –
Knowing full well that without you I’ll fail,
The Tempest is raging. The Tempest won’t wait.

Miles out to sea, my heart starts to yearn.
And I head for home in the dark of the night.
And all the while you knew I’d return;
Your love never dims… nothing turns out its light.