Scientists and, I guess, ophthalmologists, and others who study eyes have warned about the damage the blue light emitted from computer screens can do. I never really understood this because the sun sprays the earth with tons of blue light. Now, I’m no scientist, but I’ve done some reading and it seems that most eye people (and maybe even The Crawling Eye) agree that overexposure to blue light is not a good thing.

I know you’re raising your eyebrows and pounding your desktops in anger and saying to yourself, “There goes that TC again. He don’t know grammar good, and now he’s telling us about eyes! He should stick to computers…”

Well, some people DO know about the eyes, so I shall offer you a quote from the experts at AllAboutVision.com. If they don’t know eyes, then who does?

Like ultraviolet radiation, visible blue light — the portion of the visible light spectrum with the shortest wavelengths and highest energy — has both benefits and dangers. Here are important things you should know about blue light:

1. Blue light is everywhere.
Sunlight is the main source of blue light, and being outdoors during daylight is where most of us get most of our exposure to it. But there are also many man-made, indoor sources of blue light, including fluorescent and LED lighting and flat-screen televisions.

Most notably, the display screens of computers, electronic notebooks, smartphones and other digital devices emit significant amounts of blue light.

The amount of HEV light these devices emit is only a fraction of that emitted by the sun. But the amount of time people spend using these devices and the proximity of these screens to the user’s face have many eye doctors and other health care professionals concerned about possible long-term effects of blue light on eye health…

If that was not enough information for you, be my guest and read more. Go ahead! Saturate your brains with eye information and, hopefully, good grammar too while you’re there – cuz you ain’t gonna find it here.

But what you will find here is more information about Windows 10’s Night Light feature… and important stuff like how to turn it on, how to adjust it and how to make it switch on and off automatically. That kind of stuff I can do! 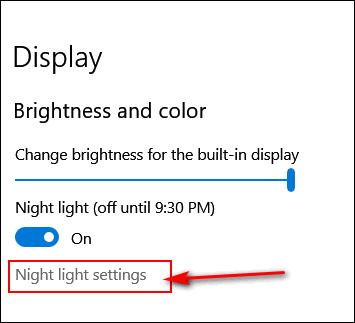 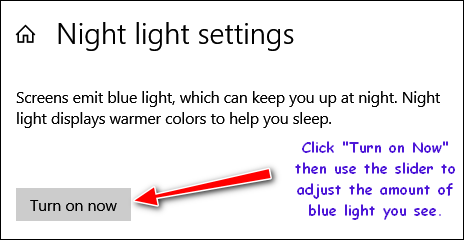 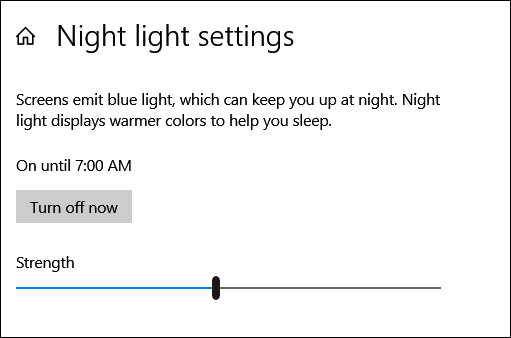 5.) In a nutshell. Everything you need to know about turning on Night Light and setting it up is in the screenshot below. Look at all those notations in orange and purple. You can set up Night Light to come on at sunset and turn off at sunrise. Windows knows when the sun goes down on you! Or you can take control like I did, and set up specific times you want to reduce the amount of blue light coming at your eyeballs from your screen.

I found my happy zone as far cutting down on the blue light coming at me from my laptop screen to be about in the middle – at 42 (see below). That’s moving the slider just about to the midpoint. 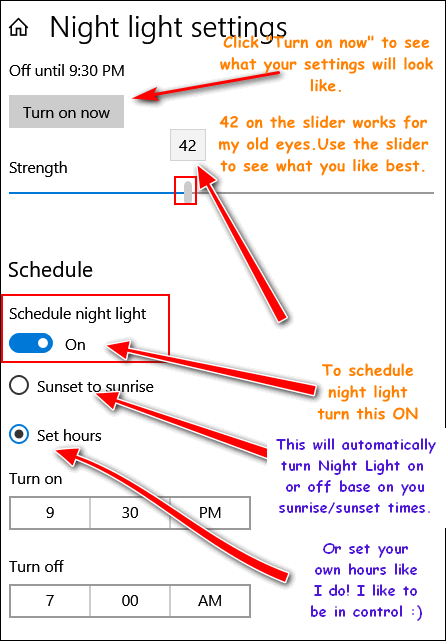 OK. Now there’s no reason to be downloading any screen dimmers or blue light killers because Windows now has a pretty good Night Light built-in.