Three Ways to Get an Anonymous Number for Your Cell Phone 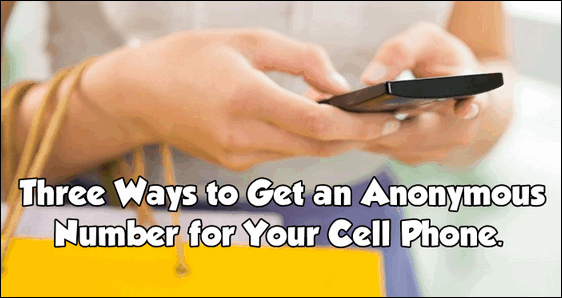 From time to time, we read something that we think many of you would be interested in – and when we do, we’ll post it here and share it with you.

You can probably think of other reasons why and situations where you’d rather keep your cell phone number private.  I don’t know about you – but I get enough cell spam already – I don’t need any more than I already get… and you probably don’t either.

The following comes from Online Tech Tips. We hope you find it interesting and useful.

Have you ever needed to contact someone, but you didn’t want to use your real number? Aside from the prank-potential, a burner number is great for selling something online. You don’t want to get spammed with even more unsolicited calls than you already receive. Thankfully, there are plenty of legitimate ways to get an anonymous burner phone number on your smartphone. You don’t have to pay a lot or resort to shady methods — there are perfectly legitimate services that can help you out.

Why Would I Need a Burner?

There are many mature reasons you might need a burner phone number. Although police procedures give burner numbers a bad name, they can be handy.

How to Get an Anonymous Burner Phone Number

There are multiple options for anonymous phone numbers–some disposable, some not.

Google Voice is a popular service that gives you a separate phone number than your actual one. You can use it through your smart phone and direct all of your calls from your Google Voice number to your actual number, as well as turn the number on and off at any time.

Google Voice provides free unlimited calling and texting within the United States. You also get voicemail, call screening, and more. While you likely wouldn’t use your Google Voice number for selling something, it is a solid choice for a spare number for reaching out to clients or to use as a business line.  All you need for a Google Voice number is an existing phone number. Visit Google Voice to sign up.
\
2. Burner

Burner is one of the most popular apps for obtaining an anonymous burner number. It’s available for both Android and iOS. You can sign up for two different types of plans: prepaid and subscription. The one you use depends on whether or not you plan to continue using your burner number.

Burner provides a number for free for a limited amount of time. It’s a good way to try out the service for yourself before deciding whether to commit or not. If you decide to use it for an extended period, plans start as low as $1.99 for a number.

The Burner app is designed for disposable, limited-use numbers. It’s the perfect option for anyone who sells a large number of items on Craigslist or through another service. It’s also a good option for anyone that wants to keep their personal number private while dating. You can use multiple numbers with Burner and dispose of them just as quickly, as well as assign different names for each number so that you remember which number is which. You can set up voicemail and much more, too. The low price point makes it a solid option for those single-use applications.

Hushed is another service that provides unlimited anonymous numbers for a small fee each month, but the difference is it isn’t necessarily designed for throwing the numbers away after a short time. It combines the best of Google Voice and Burner into one service.

A prepaid plan starts at $1.99, while an unlimited subscription plan starts at $3.99 for calling within the United States and the United Kingdom. If you want the option to make international calls, that plan is $4.99 per month. You can also pay a yearly fee to reduce your overall costs.

One of the best features about Hushed is that if you’re bombarded by calls from a number, you can simply delete the number you’re using and sign up for another. You don’t have to suffer if a telemarketing company gets a hold of your number.

While Hushed works on your smartphone, you can also use it on your laptop or tablet. You can access your account across multiple devices, so don’t worry if you’re away from your phone and need to make a call or send a text–just pull up your account.

Sometimes you just need an anonymous phone number. Maybe you’re selling something, or maybe you want to make an anonymous complaint. Whatever the reason, use one of these three services. They’re some of the most reliable options on the market today.