What in the World?

What would think of a site that was nothing but a set of spinning meters? Not much, I bet. But this site is mesmerizing and, if you care about the state of our world, a bit disturbing.

You might be tempted to ignore this Cloudeight site pick, but if you visit it, you’ll be fascinated… and it will make you think, I tells ya!

Here’s a bit about our site pick “Worldometer” from the people who made it and know it better than anyone else.

Worldometer is run by an international team of developers, researchers, and volunteers with the goal of making world statistics available in a thought-provoking and time relevant format to a wide audience around the world. Worldometer is owned by Dadax, an independent company. We have no political, governmental, or corporate affiliation. Worldometer was referred as Worldometers (with a final “s”) until January 2020, when the final “s” was dropped.

Worldometer was voted as one of the best free reference websites by the American Library Association (ALA), the oldest and largest library association in the world.

We have licensed our counters at the United Nations Conference on Sustainable Development (Rio+20), to BBC News, and to the U2 concert, among others.

Worldometer is cited as a source in over 3500 published books, in more than 2000 professional journal articles, and in over 1000 Wikipedia pages…

The live counters show the real-time estimate as computed by our proprietary algorithm, which processes the latest data and projections provided by the most reputable organizations and statistical offices in the world.

When using static numbers to describe numerical change through time, we fail to provide a sense of the relationship between the magnitude of change and the flow of time, which is how we experience change in real life. What static numbers fail to provide is the perception of the frequency and timing of events, the rhythm, an essential part of nature and a tool for understanding the physical phenomena surrounding us. Only by employing live counters we are able to convey these elements and truly grasp the magnitude of the quantitative change through time.

Let’s take a peek at some of the Worldomenter counters. These are just static screenshots of the live counters. They are much more interesting when you  watch them in real-time. And you can be sure that this site will provide you with some food for thought. 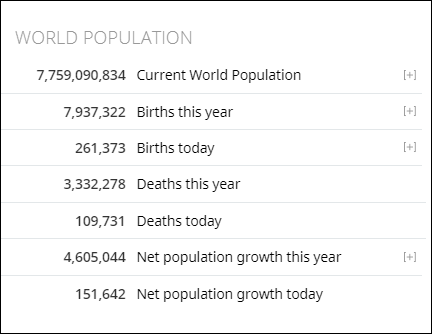 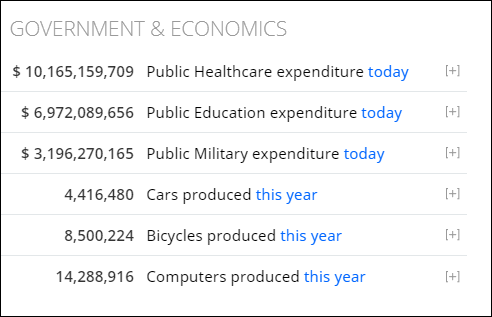 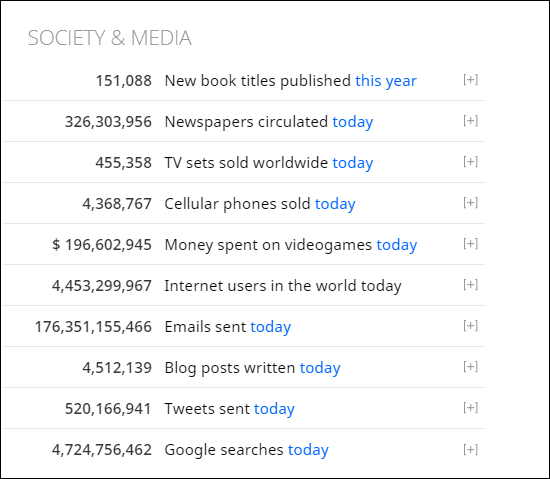 Above: Creeping up on 5 billion Google searches today and the day is not nearly over. That’s a lot of searches. 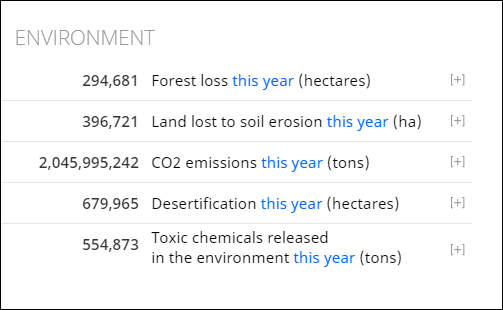 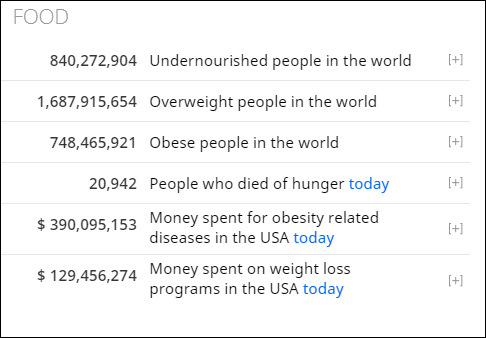 With all the money in this world, how did we let 21,000 people starve to death? 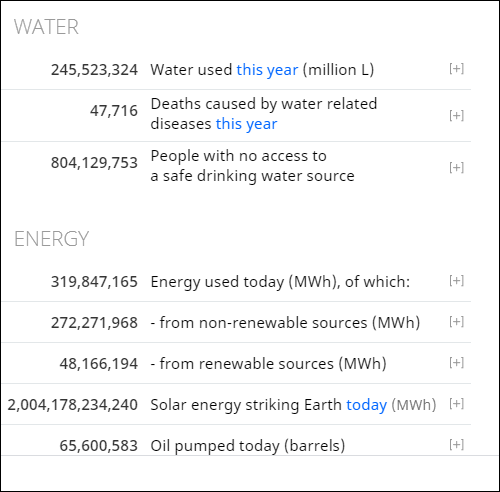 Will water be the new oil?

A lot of food for thought.

4 thoughts on “What in the World?”