When a Major Windows 10 Update Causes Major Problems… Do This

Windows 10 Fall Creators Update is due out in just a few weeks. This is a good time to remind you that if you have a major update to Windows that causes you major problems, the best and easiest way to fix it is to roll back to the previous build.  Let’s clarify (and we’re intentionally oversimplifying here): A major Windows 10 update is referred to as  “a build” and will have a build number. Minor updates are just called, “updates” ad do not have build numbers. Windows 10 Fall Creators Update is a major update.

Any time a major Windows update causes you major problems, the faster you act the more likely it is that you’ll be successful restoring the previous version (or “build”) of Windows 10, without losing any personal files, data, or programs.  Windows 10 offers you the chance to go back to an earlier build for 10 days after you install a major update. So,  it’s important that you roll back to the previous Windows version within 10 days.

OK with that out of the way. Here’s the pithy part.

The first thing to do– if a major Windows 10 Update causes you MAJOR problems — is this:

1. Press Start —>Settings (Or press the Windows Key + i )
2. Click on “Update & Security”
3. In “Update & Security” click on “Recovery”
4. In Recovery you should have 3 options “Reset this PC”, “Roll Back to the previous build” and “Advanced startup” 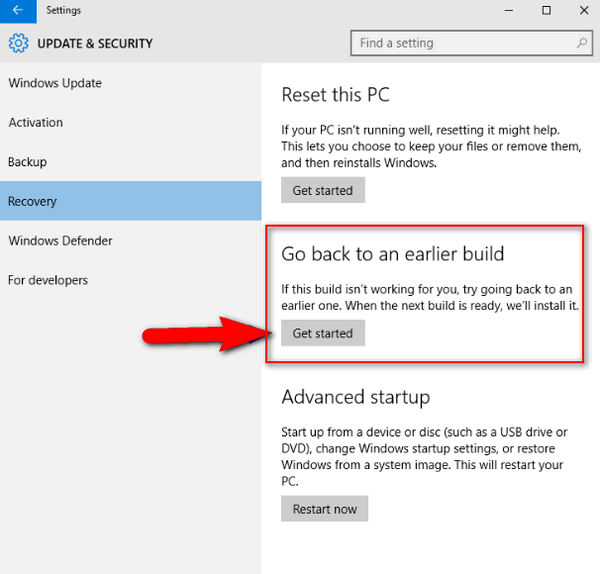 .
If you don’t see “Go back to an earlier build” as one of your choices then:

a.) The update was not a major update.

c:) You see the option but it’s not clickable. You have waited too long.

If you have minor problems with other updates,  you can uninstall the problematical update by doing this:

So, now you know what to do the next time a major Windows 10 upgrade causes major problems.