First of all we want all of you to know that while the title says Windows 7, this article applies to all versions of Windows.

Windows 7 Fix and Windows 7 Repair sound like really great programs, don’t they? It sounds like a miracle in a download. But neither Windows 7 Fix or Windows 7 Repair do anything to fix or repair Windows. In fact, if you download either of them, you’ll be in for a lot of trouble and if you’re not careful you may find yourself calling your credit card company and telling them you’ve been duped.

Windows 7 Fix and Windows 7 Repair are nothing more than updated versions of rogue security programs (i.e. scareware). They work the same as the older versions like XP AntiVirus or Windows Security or Windows AntiVirus. They’re all scareware and they all work the same way.

First you’ll get a warning that your computer is infected. Then you’ll get a notice that you need to scan your computer now. And usually, whether or not you click “Scan” or “Cancel” or “No Thanks” or try to close the window, you’ll be downloading the program that will “scan” your computer. But while it looks like it’s scanning your computer, it’s doing nothing of the sort. What it is doing is a mock scan which will always find hundreds of malicious files lurking on your computer – none of which really exist.

At the end of this mock scan, which looks very real, you’ll see a link or a button which says “Clean my computer” or “Remove malicious files” or some such nonsense. If you click that button you’ll find out that you can’t remove anything until you pay something. And if you pay something (please don’t!) another mock scan will begin at the end of which your computer will be declared CLEAN! Congratulations – no malware detected. Of course, there wasn’t any to begin with. The scan to clean your computer is just as fake as the one that showed your computer was infected with hundreds of malicious files. 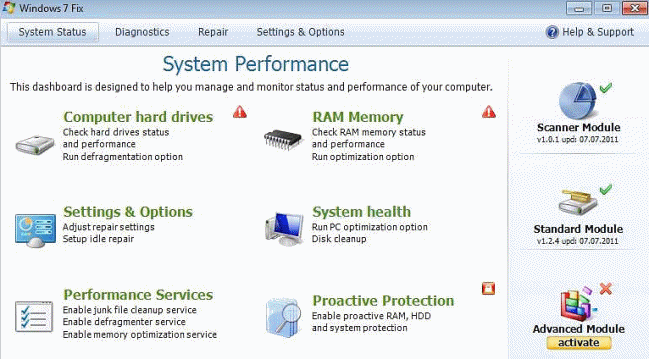 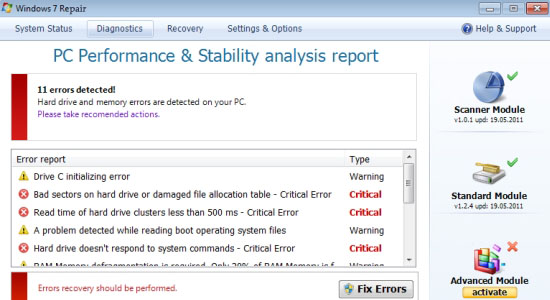 Windows 7 Repair doing its dirty deeds. Both of these “programs” are made by the same bunch.

Don’t fall for this old trick in a new costume. It’s just the same old rogue security software (scareware) that’s been plaguing Web visitors for the last six or seven years. Right now, rogue security software is all the rage with criminals. Unlike computers users a few years ago, almost everyone now has at least antivirus installed and many have antispyware software installed. So it’s not as easy as it once was for criminals to attack users with viruses, spyware or other kinds of malware. Rogue software is actually real software that sometimes slips by the best antivirus and antispyware software – sometimes installing undetected.

If you are ever in a situation where you encounter rogue software do this:

1. Don’t attempt to close the window which opens warning you that you’re infected.
2. Immediately close your browser. If you can’t, then go to Task Manager/Processes and right-click the browser’s process (Internet Explorer = iexplore.exe, Chrome=chrome.exe, Firefox = firefox.exe) and choose “End Process Tree”. Ignore the warning and click OK.
3. If that doesn’t work, shutdown your computer.
4. If you make a mistake and download the rogue, don’t panic. Just shutdown your computer, reboot into Safe Mode by tapping the F8 key while Windows is booting. Once you are at the Safe Mode menu choose Safe Mode with command prompt 5. When safe mode with command prompt has loaded, enter the following at the cursor prompt:  RSTRUI.EXE

6. Wait until System Restore has fully loaded (sometimes it can take several minutes). Choose a restore point prior to the time you downloaded the scareware/rogue. Restore you computer.

When you’re computer reboots, there won’t be trace of the scareware/rogue. It will be as if it never even happened.