A History of Windows 10: Windows 10 Versions to Date

Windows is now a ‘service’ and as such it will receive major ‘version’ updates twice each year. It was not always so, but now we all now moseying down that path. It’s a good time to review the versions of Windows 10 that have been released thus far because soon you won’t be able to tell the players without a scorecard — and you know what we mean!

Keep in mind that (according to Microsoft) each version update of Windows will be supported by for approximately 18 months after its release date. This means that Windows 10 versions 1507, 1511, 1607, and 1703 have now reached their end-of-life dates and, according to Microsoft, will not receive any further updates.

Here’s a list of the Windows 10 versions that have released, along with the version’s original release date:

Version 1607: The version is known as the Anniversary Update. This update was released on August 2, 2016.

And a reminder- and tip: If you want to see what version of Windows 10 you’re currently using, type: 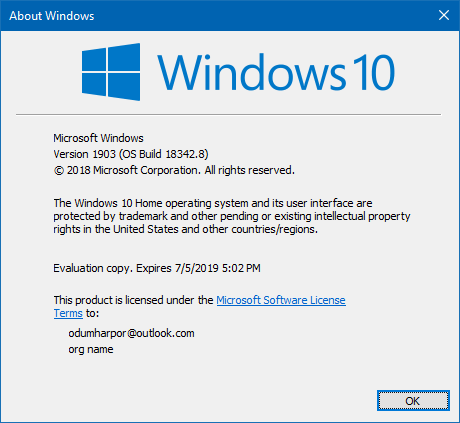 Windows insiders have been testing version 1903 for several weeks now. So far, we like it. But will you? Only time will tell!

2 thoughts on “A History of Windows 10: Windows 10 Versions to Date”