Then a while back Avast bought CCleaner and we knew it wouldn’t be long before Avast ruined it. Avast, once a great company, now creates products that rival the best PUPs and hijackers. We have cleaned dozens of computers supposedly protected by Avast only to find a lot of malware and PUPs infecting them.

I was working on a computer the other day and I thought the customer was using Chrome. I did a double take when looking at the extensions. It was the Avast browser that apparently was installed without the user’s knowlege or explicit permission. Not only did it install it also set itself as the default browser. When you first look at it, it looks exactly like Chrome. But under the hood you’ll find it has 6 or 7 preinstalled Avast extensions that cannot be removed.

Avast continues to prey on its trusting users. Now they’ve included annoying and hard-to-stop advertising pop-ups in the latest version of CCleaner. 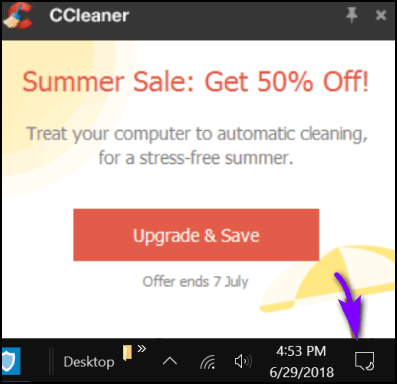 Avast seems offer freeware only as a method to instigage an array of billboards (ads) on the target’s (customer’s) PC.

If a company wants to give something away that’s great. And it’s okay if offer more featur in a paid version of the product. But what Avast is doing is ridiculous.

Avast’s primary program is Avast Antivirus. But now the stuff they install and/or try to install on trusting users’ computers is nearly as bad as the stuff they’re supposed to be protecting users from.

If you’re using CCleaner, you’ll start seeing annoying popups as soon as you update to the newest version. The only way you can stop those popups is to use Windows Firewall to block CCleaner from connecting to the Internet

It’s easier just to dump CCleaner and use Windows Disk Cleanup or use the very nice junk files cleaner the comes with HiBit Uninstaller.

Also, for other alternatives to CCleaner, check out BleachBit (free) or Disk Cleaner (free)

I don’t think that either of those are as easy to use as CCleaner, but both do a good job if you’re careful.