This tip is for Windows XP, Windows Vista, and Windows 7

You’ve done everything you can, you’ve cleaned and optimized your registry, you’ve tweaked, fixed, and fussed with all your Windows settings, you’ve cleaned and optimized your PC, you’ve removed every program from your startups, and still your Windows computer takes forever to boot up. Windows is notorious for slow boot up times. And most people are not advanced computer users and don’t feel comfortable removing some items that start with Windows – and they don’t have enough information to know which programs really need to start with Windows and which do not. And the more programs which start up with Windows, the slower your boot time will be. It’s elementary, dear Watson.

I’ve got a one-year old Windows 7 laptop. It’s relatively strong – 6GB RAM, fast quad-core processor, 500GB hard drive, and so on. I’m not exaggerating when I tell you that I could brew a pot of coffee, pour a cup, and drink a few sips of it in the time it took my lappy to boot up. Really – I’m not kidding. And I’ve tweaked and tuned and cleaned and removed all the startups I could safely remove. Still, the coffee maker was faster than my relatively young laptop.

I’ve had Soluto installed on this computer for several months and never really got around to looking at all the features of it. But sometimes trying to think of new and interesting things to write about in this newsletter is challenging – and I do enjoy challenges. As Ben Franklin sagely noted: “Necessity is the mother of invention.”

I fired up Soluto for the first time in months. I was shocked by what I found. Soluto had been dutifully collecting data about my computer’s boot up times, and doing it silently in the background. It told me my average boot up time was just a tad over 6 minutes. There’s just no way a newer computer needs to take 6 minutes (plus) to boot up.

I started looking at the information Soluto presented in its very clean and nicely organized interface. The programs that are safe to remove from Windows start up show in a green bar near the top. The programs which can be remove but require you to make an informed decision before you remove them from Windows start up are shown in an orange bar in the middle. Under the orange bar there’s a gray bar of programs which cannot be removed from start up (at least not with Soluto) – these are mostly Windows components which are required for Windows to run properly. Then at the bottom right there’s a blue bar which shows you the programs you’ve removed from Windows boot up, using Soluto.

Soluto provides detailed information about most of the programs that start up with Windows, so you can make an informed decision about each one. What’s nice about Soluto is that it allows you to “pause” a program – which means that it does not allow that program to start up with Windows. It also allows you to delay a program – so the program doesn’t start automatically until after your computer has booted. This is a great feature for those of you who like to have certain programs available to you without having to open them manually.

Soluto shows you exactly how long it takes for each program (including Windows services and necessary Windows components) to load during Windows boot up. After using Soluto, I was able to get my Windows boot time down to one minute and 23 seconds – five minutes faster than my boot time had been. So I am very impressed. I have used almost every start up control program known to man, but I’ve never found anything that worked as well as Soluto.

It’s about as easy to use as a program like this can be. Everything is graphical, with detailed information about each program that runs at Windows start-up available with a hover – and more info available with a click. It’s nicely organized and very intuitive; most of you will be able to figure it out just by looking and hovering over the graph-like bars. The bars expand and contract while you hover over them.

Above Soluto shows that Windows Indexing service is adding 21 seconds to my boot time – that’s a lot of time. 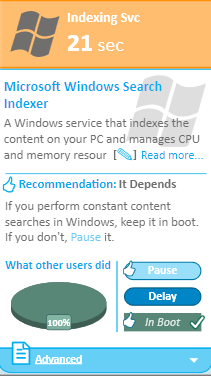 Should I pause Windows Indexing Service? Should I delay it? Do I really need it adding 21 seconds to my boot time. Soluto gives me the information I need to make the right choice for my computer. I paused it – in other word, I am not allowing it to boot with Windows because the service it performs isn’t worth the cost in boot up time to me.

Above you can see that WMP sharing was adding 18 seconds to my boot time. Do I really need it? No, I don’t. Not for me; so I paused it and saved another18 seconds. 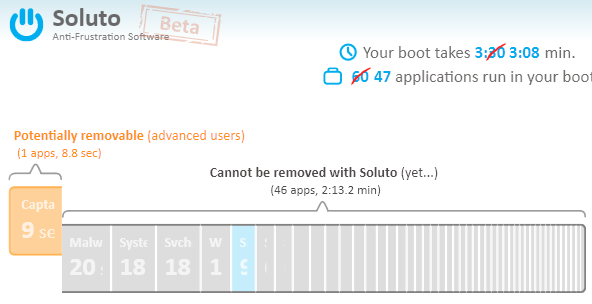 Watch a video to see exactly how Soluto works and how easy it is to use.

Soluto is the very best tool we’ve ever used to control and manage Windows start ups. It gives you the information you need to make informed decisions about what to pause (remove from start up), delay, or allow to start up with Windows.

Soluto is beta software. That means its still in development. But it ran great on two of our computers and we’re sold on Soluto. You will be sold on Soluto too – and you don’t have to buy anything – Soluto is freeware. Soluto has more features than we’ve been able to cover here, but you have a good idea now what it does and how it works. It’s easy to use, easy to understand, and it gives you the information you need to make the right choices for you and your computer. What more can you ask?

NOTICE! EB is a tough sell. I had been bragging about Soluto for a few days, trying to coax her into trying it. She’s always too busy. Finally I cornered her and she had to try it. It took her almost 10 minutes to boot into Windows 7. She tried Soluto, and after running it, told me it was a waste of time, since after her first time running it Soluto estimated she’d save about 30 seconds on her boot up time. I just sighed. I knew after she booted up again she’d save more than 30 seconds. The more information about your Windows boot up Soluto has, the more it can help you shave minutes off the boot up time. After two reboots, her Windows 7 startup time is less than a minute (yes, that’s the truth!). She’s sold on Soluto now, and soon she’ll forget it was me who told her about it, and about  six months from now, she’ll say, “aren’t you glad I told you about Soluto?” I’ll just sigh. At least I got to say my favorite five words to her: “See? I told you so!” Keep this in mind: It may take a couple of reboots before you see a big improvement in your boot up time.

You can download Soluto free, or read more about it from the Soluto web site.