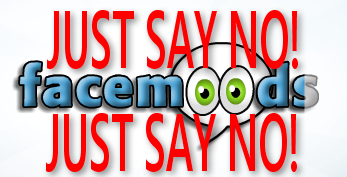 The name of this new scumware? Facemoods. How cute. Facemoods is free but its effects on your computer could be costly – in repair bills as well your privacy.

Like all other scumware programs, Facemoods offers you free emoticons you can use on Facebook. But like with all other sneaky software it installs a mysterious search toolbar which is a search engine and start page hijacker). While the program is ostensibly free, If you uninstall the search toolbar none of the other programs will work. Why? Here’s why.

The search toolbar it installs will hijack your current search engine and inject advertisments in all your searches – regardless of whether you choose to use Google, Bing, Yahoo or any of the other major search engines. That’s bad enough, but the garbage toolbar that this company installs makes the advertisements appear to be legitimate search engine results and places them at the top of your search results making it more likely that you’ll click one of these disguised advertisements.

Not only is this scumbag company’s software ruining your computer – but it’s stealing from those who pay to advertise with them. Since the company gets paid by the click (CPC) they get paid every time you accidently click on one of these disguised advertisements. It’s morally and ethically wrong to you and to the advertiser – yet this company is supported by users who download their “free” scumware. In other words they’re making money from you. They figure if you use their software free then they have the right to steal information from your computer, hijack your start page and your chosen search engine.

You can’t get rid of all the junk this program installs by simply going to Control Panel (although they say you can) and removing each program. If you do that you’ll leave behind a lot of pieces of this scumware –  possibly including the spy apparatus it installs to track your web browsing and the links you click on.

So Facemoods is another scumware program from yet another of scumware company. The search toolbar it installs will inject all sorts of advertising in your search results disguised as real search results. The toolbar will also use your computer as a billboard displaying random ads in various locations. It will also hijack your preferred search engine and your browser’s start page – and replace them with its search engine and its start page – so they can extract more dollars from you by showing you….MORE ADVERTISING. Advertising based on information this scumware collected from you – and your computer. As long as this scumware is installed you can’t get rid of its tracking features or the injection of ads into your search results and on your computer – and you can’t get away from its spyware attritubes which track you wherever you go on the web. Facemoods is not good for you or for your computer and it could cost you your privacy and even money if you have to pay someone to fix your computer. The longer you leave it on your computer the more likely it is you will start having serious problems with your computer.

Facemoods is owned by Volonet – an Internet company based in Israel. You wouldn’t know that unless you wanted to dig deep and do some detective work.  They aren’t very proud of their company – gee, we wonder why. Their company name appears nowhere on the Facemood’s site that we could find; nor does it appear on their privacy policy, “About us” page, or on their contact page. Are they ashamed to be associated with Facemoods?  Or do they want to appear to be a legitimate company and distance themselves from this product. We’re betting on both. If they’re proud of Facemoods why the secrecy? Maybe they don’t want their corporate name sullied by their own scumware product. But your guess is as good as ours.

“Volonet Is (sic) an Internet Company founded in 2008. We Develop, design, and market http://facemoods.com which is a highly engaging, fun, and viral software that adds rich content to social networks communication channels.” (From their LinkedIn page.)

Don’t fall for Facemoods – no matter how “cute” you think they are. Facemoods is bad, bad medicine – don’t let yourself be tricked into downloading it or any of the other scumware that promises you everything for nothing. It’s free only if you’re willing to risk your personal privacy and the performance of your computer.