This week’s freeware pick was selected for two reasons: it’s fun and it uses the Adobe Air installer. If you don’t already have Adobe Air installer, you’ll be prompted to download it when you download the freeware pick “Go Videos”. It’s good thing to have installed (Adobe Air) because you’re going to see it more and more. Why? Because it can be used on other operating systems too.

So enough of the gummy worms and bread – let’s get to the meat. As usual, we’re going to bring in the program’s developer to tell you about his (her?) program. We don’t know this guy from Adam – so it could be Eve for all we know.

“This handy tool allows you to select YouTube videos in categories of Most Watched, Car, Travel, Entertainment, Recipe, Fitness, Animals, Funny, Fashion and Dance with a single click. For each common topic there are icons of sub-topics. Search results are listed as small images for easy browsing with a click. Also find anything you like by entering it in the search box.” 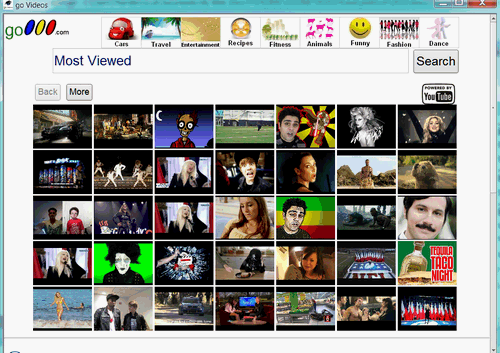 Yes this is a screen shot of Go Videos running on my computer.

Now it’s time to say goodbye, to YouTube Videos on the web, and say “hi” to Go Videos and watch your favorite YouTube videos on your desktop sans browser. Get Go Videos here. Yep. It’s our freeware pick of the week…I’ll bet EB’s tarantulas are on it!