Here’s How to Enable Text Prediction in Windows 10

Text Prediction has been a feature of Android and Apple-powered devices for a long time. It saves time and automatically corrects spelling errors. Windows 10 has offered text prediction also, but it was limited to the onscreen keyboard (software keyboard) that is mostly used on Windows 10 tablets.

4] In Typing under Hardware Keyboard turn both switches to “On” (see screenshot below): 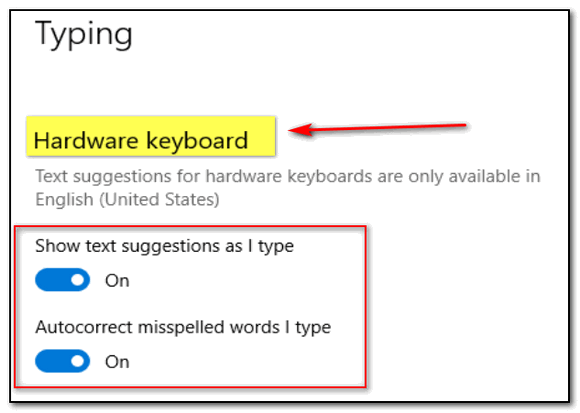 Text Prediction works on any Windows 10 App – Edge, Notepad, WordPad, etc. But woe! It does not work on any 3rd-party apps, like Chrome, Open Office, and so on.

Much like its older brothers (sisters?) on Android and Apple devices, as soon as you start typing you will see suggestions pop up. You can choose one of the suggestions by selecting it with the arrow keys – Up/Down/Right/Left.

Above: Text Prediction in action.

To find out what version of Windows 10 you’re using, type WINVER in the taskbar search and press Enter.