How to Change Cortana’s Voice

If you use Cortana you’re probably used to hearing a female voice, but did you know Cortana goes both ways? Oh yes she does. This is the 21st century, I tells ya! Anyway, if you use Cortana (I like to ask it about the Weather, because I’m lazy and I don’t feel like watching 200 commercials and hearing about the weather in come remote place – I don’t care if it’s snowing in Wyoming, I don’t live in Wyoming! I want weather for my city, my area, my state! I don’t want to wait 8 minutes for weather on the 8’s. So I ask Cortana: “What’s the weather for Saturday” and in less than 8 seconds I have the weather. No weather on the 8’s for me. No more going to weather sites and slogging through the ads to get the weather.

Anyway, if you’re male then Cortana’s female persona is probably good for you – you probably find her voice, if not her looks, soothing. If you’re female though, you might like a manlier, John-Wayne-type Cortana. I know it sounds weird, nevertheless. You can have a manly Cortana available at your beck and call.  In fact if you’re running Windows 10 Creators Update (version 1703) t you have two male alternatives to Cortana’s charming feminine voice.

How do you get rid of the female Cortana and have her man up? 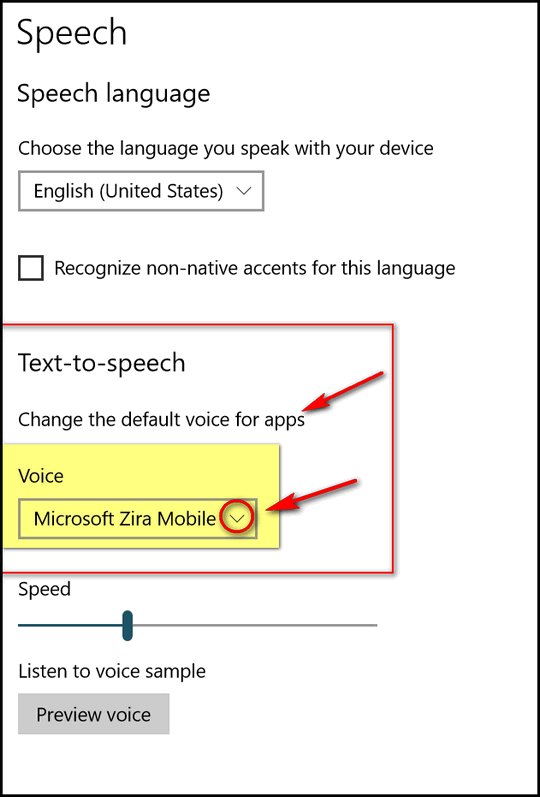 Under Text-to-Speech, use the drop-down arrow to select a voice. Notice, that Cortana’s voice is not her own, but some ventriloquist named “Zira”. She’s the gal who speaks for Cortana. If you don’t find Cortana’s (Zira’s) voice soothing, try Mark Mobile.

Mark’s a real manly man, I tells ya. At least he sounds like it. He’s the kind of guy you wish you would’ve married. I am just kidding!  Guys you can keep listening to Zira (she’s default) or Mark (Hey! It’s the 21st century!). Gals you can choose Mark (or David) or leave it alone and listen to Zira do the voice-over for Cortana.

And for those of you who have updated to Creators Update Version 1703 (or newer) you have an additional choice. His name is David. Do you like the TV show “The Walking Dead”? Do you like zombies? Boris Karloff? Then you’ll love David. He sounds like he just walked off the set of “The Walking Dead”.

So, depending on the version of Windows 10 you are running, you have at least two and as many as three voices to choose from. And I’ll bet in the future you’ll have even more choices… from sultry to husky to downright gravelly. Who knows? Maybe someday we’ll even be able to choose a famous voice to do do te voice over for Cortana. As for now, there’s only two… or three.

And whatever voice you choose for Cortana is the voice you’ll here for any app on Windows 10 with Text-to-Speech functionality.  So choose carefully – you’ll have to listen to Zira, Mark, or David any time your PC speaks to you.

4 thoughts on “How to Change Cortana’s Voice”