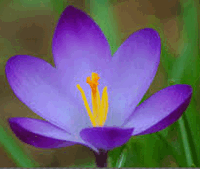 They showed their pretty heads this week. After a cold and snowy winter, the crocuses, and the snowdrops magically showed their lovely heads and broke winter’s spell – at least for a while.

One day the ground was covered with snow, then the snow melted and brown, muddy dirt was all that was left. Then, magically, from the ugly patch of brown appeared little yellow and purple and white flowers. Every year, when I see the first signs of spring emerge from the frozen, brown, ugly dirt, I think it’s a miracle. And although I’m now an old man, the miracle of spring is just as much a miracle now as it was when I was a child.

But you see, I never lost the child inside. I never lost the feeling that it is the little things that make life worth living. The first flowers of spring, the sight of kids flying kites on a sunny, but chilly day in April. That first perfect day in spring when the sky is so blue and the majestic clouds so white, that it takes your breath away.

And while it’s not a little thing, it’s a miracle. The vernal equinox – the beginning of the seasons of life. When the sun crosses the equator on its way to the Tropic of Cancer and brings with it the season we call summer. Life loves the spring and summer and so do I. These are the times when so many little things make me glad to be alive.

Sitting outside on one of the first nice days of spring – the air smells different. It’s cleaner and fresher and newer somehow. And the little things like the sounds of birds singing in the trees, and smell of the freshly mown grass, and even the tiny, seemingly insignificant ants, moving around on the ground beneath my chair – make my day special and make life even more worth living.

Looking up at a puffy cloud floating above me, I can see the head of a horse or a dragon, or a Greek god. I can see whatever I imagine. And suddenly, it’s a time machine taking me back to my days as a boy, lying on the green grass looking up at a sky that seemed too immense to understand. All the clouds became something new – a dog, a castle, an alligator, a dinosaur…

Bows and flows of angel hair and ice cream castles in the air
And feather canyons everywhere, I’ve looked at clouds that way
But now they only block the sun they rain and snow on everyone
So many things I would have done, but clouds got in my way.

And though I’m an old man, I really don’t know clouds at all. I’ve looked down on clouds from windows of airliners, and they look flat and uninteresting -not all the “feather canyons” they look like from the ground.

And think there’s a life lesson in there somewhere. I guess you can look at anything and see it in different ways. And that includes people too.

It’s easy to put people in little boxes and put labels on them. The wrong labels and the wrong boxes make it easier to dislike them – especially if they don’t think as you do.  I try not to put people in boxes and label them, but sometimes I do. I don’t like that. I try hard not to do it. It’s a little thing a lot of people do that turns into a big then when boxing and labeling turn into hate.

We can look at anything in opposite ways. You may love winter and dislike spring. And that’s fine. You’re not like me and that’s fine too. But still, it’s hard to understand how anyone could not be touched by the sight of those first tiny flowers of spring. That’s life springing from death – and that’s not a little thing. It’s something we all should take to heart.

The seasons of life are quite like the seasons of the year.  Childhood, Youth, Middle Age, and Old Age. Spring, summer, autumn, and winter.

All these thoughts were stirred by some little flowers that announced told me spring is here – and they were such little things.

Little things are not trivial things. They can be inspirations and make life worth living.

Go and look and you’ll see so many little things – you’ll wonder how you missed them before.

3 thoughts on “It’s the Little Things”