Microsoft Relents, Makes it Easier for Windows 11 User to Switch Browsers but Then… 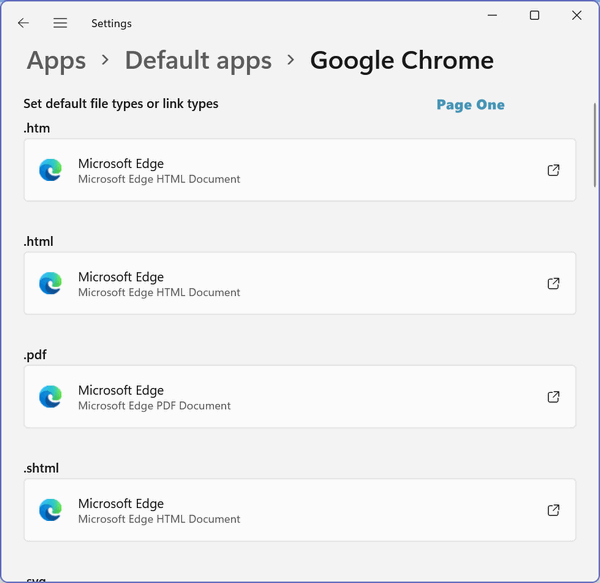 In a current Windows 11 ‘Windows insider” preview build, Microsoft seems to be giving in to users’ animus toward Microsoft’s plan to ram its Edge browser down every Windows 11 users’ throat.

Windows 11 currently makes users run a maze to change their default browser, by making them choose the file types the browser should open. See our article here.

In a recent Windows Insider preview build, Microsoft relents and allows users to switch browsers with a single click – although it only changes the defaults for .htm and .html files (web pages).

But Microsoft continues its incomprehensible mission to force Windows 11 users to use Microsoft Edge. Edge is a great browser, a lot better than any previous Microsoft browser. Microsoft doesn’t need to keep forcing it on people.

Neowin reported on Microsoft’s new tactic. When you open Edge and attempt to download Chrome you’ll see a variety of popups in the upper-right corner.

“Microsoft Edge runs on the same technology as Chrome, with the added trust of Microsoft,” one notification says.

“That browser is so 2008!” proclaims one almost puerile Microsoft popup

“Do you know what’s new? Microsoft Edge.” says another.

These popups aren’t the only way Microsoft tries to stop you from switching to Chrome. If you search for Chrome or download Chrome using Bing, the default search engine in Edge, you’ll see warnings about Chrome near the top of the page, telling you that “You’re already browsing in Microsoft Edge,” or “There’s no need to download a new web browser.”

And that’s not all. According to “TechRadar”…

A new feature in Microsoft Edge that gives users the option to use a ‘buy now, pay later’ (BNPL) service called Zip, has begun appearing in the web browser for some people offering an alternative way to pay for things – and it’s not going down well with people.

A few weeks ago, Microsoft announced the feature in a blog post, saying that it was partnering with “Zip (previously Quadpay) to offer a BNPL payment option at browser level.”

While some retailers offer buy now, pay later options, by integrating Zip into Edge, it means people can use it on any site. Rather than entering their credit card details, they can use Zip instead, and “any purchase between $35 – $1,000 you make through Microsoft Edge can be split into 4 installments over 6 weeks.”

Microsoft claims its aim is to make it easier for Edge users to pay for products using Zip, however, the change has got many users angry… See the TechRadar article here.

Microsoft’s actions are baffling. Microsoft is allowing its Google envy to drive it to go to such lengths to coerce Windows 11 users into using Microsoft Edge. Microsoft Edge is a good browser, but users should not be constantly prodded into using it.

5 thoughts on “Microsoft Relents, Makes it Easier for Windows 11 User to Switch Browsers but Then…”