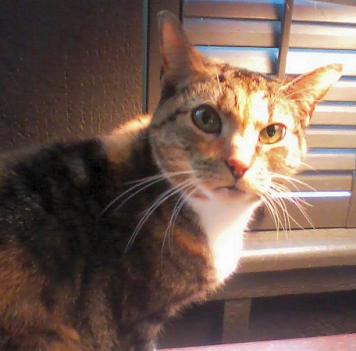 I buried my little friend two weeks ago yesterday. I put her in the ground on a warm and sunny day in May.

Back in late January, of this year, she was diagnosed with an inoperable cancerous tumor in her ear canal and from that day on I knew she was doomed. The doctor said first it would affect her balance and she’d have trouble walking – and then she would die.

But I never gave up. She never gave up. Neither of us ever gave in. She only weighed six-and-a-half pounds when all this started. A very small creature with a very big heart – and very big eyes.

The first thing I notice at the beginning of her decline was that it hurt her to eat solid food, not because of her teeth but because of the location of the tumor. I had to be resourceful if I wanted to keep her alive. So when I bought food for her I looked for the softest food available – the canned pate’ looked like it would be the solution. It was for a few weeks, but then she had trouble eating it and that’s when I discovered the “bisque” treats. But these were treats not meals. I had to find something else. Something that would sustain her and give her some variety in her meals.

That’s when I discovered baby food. It had been decades since I shopped the baby food isle. The last time I did it. Gerber was just about the only brand around- there may have been others, but for the life of me I can’t recall the brands. Back then, baby food, other than the cereals that came in boxes, came only in small glass jars with metal lids.

I was shocked then when I first started shopping for baby food for her. The baby food business has changed drastically in the last 40 years. Gerber is still around, but there so many more choices. There are not only small glass jars now, but a cornucopia of plastic containers and squeeze pouches and hundreds of flavors and flavor combination.

I was determined to find something she could eat, something without a bunch of additives and something that would noursish her. But, what would she eat? What kind of baby food should I buy?

I had no way of knowing what she might eat, so I tried turkey with rice, beef with vegetables, chicken with rice and just plain turkey and chicken. It was the same kind of baby food that you’d for infants who were, for the fist time, exploring the pleasures of “solid” foods. However, using the word “solid” to described these pureed combinations may be a bit of hyperbole.

I let her try each and to my surprise she liked the chicken with rice, beef with vegetables, and turkey with rice the best. She wasn’t too keen on the plain turkey or chicken. Maybe becuase it was pulverized into a goopy morass.

I was so happy that I found something she would and could eat and something that would sustain her. I started mixing it with canned pate’ and stirring a little and “half-and-half” (half cream and half milk) into the mixture to add calories.

Always on the lookout for new flavors to encourage her to eat, one day, while shopping at Aldi (a discount grocery store) I found pouches of babyfood. They had some interesting flavors including peas and white turkey and chicken with sweet potatoes. Not that I ever thought she’d eat them, but I bought one of each. She liked the chicken with sweet potatoes, but she loved the peas and turkey maybe the best of all the flavors. So you can bet I stocked up on that.

After a couple of months of this, she seemed to be holding her own. She’d hide a lot during the day, but in the evening she’d come and spend time with me. She loved to sit on my lap while I petted her head and loved her.

Then one day, near the beginnig of April, she came out into the kitchen to get her breakfast and she fell over on the floor with a thump. She got back up, but she was not steady on her feet. It was a sad day when I realize that she was at the beginning of the end.

She learned to live with her balance problems. When she’d eat her back legs were spread to help maintain her balance. And although she had trouble climbing, she still tried -but she did so gingerly. It was getting down off chairs and desks that caused her the most problems – sometimes she’d fall and I hear her hitting the floor.

But she fought on. I kept feeding her the baby food mixture, but as time went by she ate less and less. She was having a hard time keeping herself clean and sometimes she’d have “accidents” when going to the bathroom. But she never gave up. And I just kept on loving her, knowing that she didn’t have much time left. By then, she was down to just five pounds – she looked so thin and frail.

I struggled with putting her to sleep – or having her “put down” a term I dislike. I knew it was coming, but I hoped endlessly that this loving little animal would die peacefully in her sleep.

I wondered how I’d know when “that time” came. A friend told me “Don’t worry, you’ll know”. How would I know? What am I looking for.

The time came and I knew it was time.

Wednesday morning, May 30, 2018, she came staggering into the kitchen. I noticed how thin and frail she’d become and my heart was heavy with sadness when I looked at her. I tried to give her breakfast, but she couldn’t swallow it. She couldn’t even swallow the water I gave her.

It was a warm, sunny, late-spring day, so I let her go outside. She was an indoor cat but she loved her outdoor excursions and she never left the yard. But on this day, she went in the next door neighbor’s yard and she lay down right next to their house. I looked at her and went and picked her up and put her back in my yard in the chair she used to love to sit in and watch the world go ’round and ’round.

I went inside and I called the vet and made the appointment I never ever wanted to make. A few hours later, I put her in the car. Usually she hated to get in the car and I have to put her in her carrier, but this day, she didn’t protest. She was so sick.

A few minutes later, while I petted her head and talked to her, the vet gave her an injection. My little friend opened her mouth and with her eyes wide open she left this crazy world behind.

The vet gave me a little cardboard “coffin” and I lined the bottom of it with a soft, clean towel. I took the little coffin with my buddy inside and buried her in my backyard.

I’ll never forget her last day on Earth with me. But more than that I’ll remember the wonderful and happy life and family I gave her. Millie was the most loving and amazing cat I’ve ever seen.And a loyal and loving friend and companion. She will be dearly missed.

Every day since I buried my little friend, I’ve gone out to her grave just to remind how much I miss her. But somehow I think she already knows.

Millie… this is for you.