The Fight For Net Neutrality

Before we begin our rant, let’s first define what net neutrality is and what happens when it’s gone:

What is Net Neutrality

“Net neutrality is the principle that Internet service providers and governments regulating the Internet should treat all data on the Internet the same, not discriminating or charging differentially by user, content, website, platform, application, type of attached equipment, or mode of communication.” (Definition from https://keepournetfree.org/information.html )

What Happens if it’s Gone?

“Without net neutrality, ISPs can force websites like Amazon or Netflix to pay additional fees to be accessible. Without net neutrality ISPs have the ability to smother their competition by simply making it inaccessible to consumers. Garage-based startups of the world simply cease to exist, unable to even reach market. If net neutrality is removed ISPs will have full reign over the internet, this likely means you can expect to see things like Internet fast lanes – what does that mean? Imagine having to pay extra money to access websites like Facebook or Hulu.” (From https://keepournetfree.org/information.html )

Now, put on your imagination caps and imagine a highway that has 6 lanes. Each lane has it’s own speed limit. If you are rich and can afford to pay the most money, you can drive in lanes  5 and 6 with no speed limit at all. If you afford to pay a little less, you can drive in lanes 3 and 4 with a speed limit of 70 MPH. But if you don’t have much money, you’ll be able to use the highway, but only lanes 1 and 2 – which have a speed limit of 35 MPH. But that speed is rarely attainable because there is so much traffic… it’s bumper-to-bumper if you’re driving in lanes 1 and 2.

OK got the picture? This is an over-simplified example of how the internet may work if net neutrality rules are removed.

On May 18th 2017 the FCC voted 2-1 to remove net neutrality regulations in the United States.

What this means,, no one knows… exactly. But it doesn’t take a huge leap of logic to imagine sites paying ISPs for “favored” or “sponsored” status. If you’ve been paying attention, small mom & pop ISPs have been disappearing  from the landscape, either being absorbed by the big predatory ISPs like Spectrum (formed by the merger of Charter Communications & Time Warner Cable), Comcast/Xfinity, AT&T, and a few other big, but lesser players… or simply because they were too small to compete.

Currently about 90% of us access the Internet via one one of the big, semi-monopolistic, ISPs. Since there is relatively small number of ISPs left, and so many tens of millions of us connected to the Internet via one of these ISPs,  it’s not hard to imagine scenarios in which, for example, Hulu pays ISPs “A”, “B” and “C” for “favored status”.

If you’re a Hulu subscriber, you’re not going to have any complaints. But if you’re a Netflix subscriber, when you visit Netflix.com you’re either redirected to Hulu, or your bandwidth will be throttled by your ISP – so much so that watching Netflix becomes an exercise in patience… and your movie or show stops and starts, buffering every few minutes.

Imagine sites that support your political views or religious beliefs being throttled, while sites which support opposite political beliefs or other religions are favored because they paid to have sponsored status with YOUR ISP? How would you feel if you visit a site you’ve used for years and find that you’ve being redirected to other sites that espouse religious or political beliefs that are opposite or upsetting or distasteful to you?

You think it can’t happen? It can. When money and ISPs rule the internet without restraint the companies and sites who pay the most will be favored and those who don’t pay, can’t afford to pay or won’t pay are less accessible or not reasonably accessible at all.

Sites like ours would not be accessible or barely so. Access to our site would be severely restricted by your ISP who would throttle your speed when you visit our site. They’ve could list our a “slow lane site” because we can’t afford to pay to be in fast lane or even the moderate speed lane. The truth is that we can’t afford to pay at all, so there is a better than even chance that our site and sites like ours, will be so slow that no one, but the most intrepid, will ever want to visit.

The end of the road for small developers and freeware?

Many freeware programs are offered by individual developers who are, thanks to net neutrality, able to buy a domain name, create a site, put it online and promote his freeware. His site will have the same accessibility as Google, Microsoft, and other large corporate sites. When net neutrality is gone, his site may well not enjoy equal accessibility and his freeware – and some of our favorite programs – will no longer be easily accessible.

It’s easy to see how this may all work out.

It’s easy to see how ISPs may give favored or sponsored status to sites, companies and organizations that pay the most; it’s all about the money. In this age, it’s always all about the money. The only thing that has stopped this kind of thing from happening up until now have been the net neutrality regulations.

Imagine if the FCC allowed TV stations and networks to broadcast whatever they wanted, whenever they want. Imagine the kind of garbage our kids would be exposed to? It’s bad enough as it is. But imagine no rules at all?

We are not sure how much power any of us have as individuals or what we can do to prevent all these worst-case scenarios from becoming  everyday reality. But here are many sites where you can learn more about net neutrality and sites that can help your voice be heard. Will letting congress know how we feel help us keep our internet free? Have you any faith that our congress to do anything at all? All we can do is try to keep the internet free by contacting our senators and congressmen and congresswomen and tell them we want to keep net neutrality.

At the end of this article, we list some sites where you can learn more about net neutrality and what you can do to help in the fight against those who want to prevent the internet, our internet, from being controlled by big ISPs and big money.

Want to see what the internet would be like without net neutrality?

There’s a “Removal of Net Neutrality” add-on for Chrome that you can install that simulates what the internet might be like when net neutrality is gone.

Here’s more information about that simulator…

“To demonstrate the impact of removing Net Neutrality, this extension slows your internet connection and blocks several websites…

With the FCC preparing to remove Title II restrictions on ISPs and destroy Net Neutrality, it is important that every citizen of the United States understands what the removal of Net Neutrality would entail. This extension shows you what the ramifications of this decision would be by slowing all websites except for “sponsored sites”, and blocking content those sites’ competitors’ websites….” 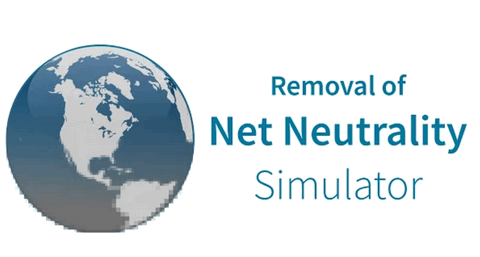 You can install the “Removal of Net Neutrality Simulator” by using your Chrome browser and going to https://goo.gl/6ki26E and installing the add-on.

We know. It seems like people have been talking about net neutrality and what would happen if we didn’t have it – for a really long time. But now, all the pieces are in place to bring an end to net neutrality. Is this what you want? Does the government really represent the the voice of the people? It’s hard to believe that any of us, except the rich and powerful will benefit from the end of net neutrality. But what do you think?

Here are some sites you can visit to learn more about net neutrality and the end of net neutrality. We hope you take some time to visit them:

Email your representitives — made easy for you:
https://act.eff.org/action/tell-congress-quit-trying-to-sabotage-net-neutrality

And remember, if net neutrality was not in place, it’s highly unlikely you’d be able to reach any of the sites listed above.

7 thoughts on “The Fight For Net Neutrality”