The Real Story of the Christmas Tree

After doing some research, it’s obvious to me that, to this point, no one really knew how this whole Christmas tree thing got started. It’s not like someone picked up a pen and kept notes. But I did some digging, and I can now tell you the real story of Christmas trees.

Back in the pagan days, before the birth of Christ, people would get crazy on the first day of winter and start jumping around and hooting and snorting and drinking barrels of rotten corn cob juice, which contained, among other contaminants, alcohol. These pre-Christian hooligans would get drunk, smoke rope, and jump around in their intoxicated state.

In other words, they had a party.

Like some people in our modern society, they needed an excuse to drink, act insanely, canoodle, and carouse. They picked the shortest day of the year, also known as the winter solstice.

I would like to note here that we modern folks use St. Patrick’s Day, New Year’s Eve, anniversaries, birthdays, and whatever other occasions we figure we can get away with for such foolishness.

But that’s the way progress goes – we never get enough!  Instead of constraining the reptilian brain that lurks inside us all, and limiting our days of partying and revelry to the winter solstice, we added several more days of debauchery.

Anyway, after these old pagans sobered up, they realized that all their drinking and carousing didn’t change anything — they still had months and months of cold, snow, ice, and dreary days to go before they could trot down to Walmart and buy vegetable and flower seeds with which to plant a colorful garden.

This realization made them woeful and  – well let’s face it they grew insane with endless darkness, hopelessness, and impending doom.

Then one winter solstice, a very hairy, but nearly upright Neanderthal named Ooma came stumbling along and presented the festively dressed pagans with a delightfully scented evergreen branch.

Naturally, all the pagans were stunned… and thrilled!  A green thing still green on the winter solstice? NO WAY!

They almost had Ooma executed as a charlatan, until he offered to show the stunned pagans his evergreen farm some several miles down the road.

Since they did not have bicycles or cars – not even horses or mules – in those days, those some several miles seemed like a long, long way.

To make a short story longer, a pagan named Klonder (who would later discover the Klondike bar) followed Ooma to his evergreen farm. And wouldn’t you know it, all the evergreens were green right there on the very day of the winter solstice.

Klonder’s head spun around and his eyes batted crazily – he was stunned!  But Ooma was not yet finished! He went into his mud hut and came back out with a jar of fireflies and unloosed them upon the evergreens. They took flight, buzzing insanely in the frosty winter air. Looking for refuge, they lit upon the branches of the evergreens just as darkness was descending upon the land. The trees were ablaze with the light of 500,000 fireflies, all of which soon froze to death and dropped upon the snow where they would like unheralded and stiff until the spring thaw when they would be gobbled by some various wild critters.

Naturally, when Klonder returned to his band of pagans, he regaled them with the tale of Ooma’s evergreens, all green and pretty and amazingly ablaze with fireflies, smack dead in the middle of the winter solstice.

Most of the pagans didn’t believe Klonder and advised him to give up drinking and smoking rope, but some believed him and regaled their children with Klonder’s saga. Thus, the tale of the evergreens ablaze with lights lived on through the centuries…

Then of course, after Christ was born, things changed, the world changed, and all the pagans disappeared.

And so did the Neanderthals, but that had nothing to do with the spread of Christianity.

When Martin Luther (1483-1546) heard of it, he reintroduced evergreen boughs as a symbol of Christmas. The truth be told; however, Martin did not invent the Christmas tree. The Christmas tree didn’t come along until a used horse salesman named Darby Brown, looking for a way to increase sales in winter, started hauling in dwarf evergreen trees (bushes if the truth be known) to sell from his used horse lot for the first time circa the winter of 1600.

At first, people thought Darby was a nutjob goof — selling dead trees from his used horse lot. But when he attached candles to the branches and stuck sardine cans shaped like angels on top of the trees, folks nearly went berserk.

And, of course, Puritans knew only blood, sweat, and tears — and fire and brimstone. So, it’s no surprise that they hated Christmas trees.

In fact, the Puritans outlawed many Christmas traditions because people who celebrated were having more fun than they were. Can’t have that! And so, the Christmas tree tradition was much slower to catch on in England and parts of North America both of which were rife with Puritans in funny hats. It wasn’t until the late 19th century that many American homes had Christmas trees.

So, the next time you start thinking something good about the Puritans, you just stop yourself. If they had their way, you’d be sitting on a tree stump, eating a bowl of cold gruel, wincing in pain from your frostbitten extremities.

If you’re a Puritan, I didn’t mean to offend you. Come on over on Christmas day and I’ll make a turkey dinner – please wear a mask! I promise I won’t have one bit more fun than you’ll have. Especially not this year, the year of the pandemic – pestilence abounds!

And now everyone knows the real story of the Christmas tree and Darby Brown.

Now, I wonder if Darby is any relation to Charlie?

We hope you enjoyed this whimsical look at the history of Christmas trees.

We wish you and those you love, a very Merry Christmas. May the True Spirit of Christmas be with you during the Christmas season and always! 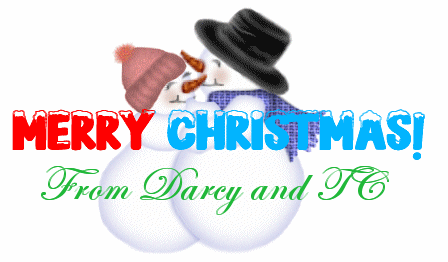 6 thoughts on “The Real Story of the Christmas Tree”