And here’s another tip. It might look very convenient to store your backups on DVDs since Windows 7’s backup feature offers that option. But this is 2011, not 1999. Computer hard drives are huge – generally between 300 – 700GB. A DVD holds a tad over 4GB. If you have a 500GB hard drive and it’s half full, you’re going to need about 32 DVDs to do the backup even if he drive image is compressed to about 50% of the size of the data being backed up. It might cost you more to buy the DVDs than to buy an external hard drive – and even if it didn’t, do you want to sit by your computer for hours feeding it DVDs? No you don’t.

We don’t want to lead you astray. Windows 7’s backup is good but it does not have all the options and features or bells and whistles of many of the free or commercial image-based backup programs that are available. But that can be a positive thing too since fewer features means it’s simpler to use. Windows 7’s backup feature does make drive images in about the same amount of time as some of the other backup programs we’ve tried. In other words, it takes a while. The more data you have, the longer it will take to back up. I continued to use my computer doing the backup, you may choose to do so as well. It took a little less than two hours to complete the backup of my laptop – about 300GB of data.

And while Windows 7’s backup doesn’t call their backup an “incremental backup” – it does essentially that. Once you’ve made your initial “system image” backup, you can schedule it to run once a day, once a week, once a month – whatever interval you prefer, and Windows will only add or modify things which have changed from the first backup you made with it. That’s because Windows 7 backup is a block-based file backup.

This means each block in a file is examined and if a duplicate already exists on the last backup, and this is the important thing, even if from a different file, that block is not saved. Which is really good and very clever. So the first backup you make is always a full backup. The following backups will only save changed blocks. The one disadvantage to this method is that you cannot manage your backups individually. But for most of us, it will work just fine. The most important thing is that you have an image-based backup. It’s the only kind of backup that will completely restore your computer to exactly as it was before disaster struck, even if the disaster was a bad hard drive. You can use your image-based backup on a brand new hard drive – IF the new drive is the same size or bigger than the old hard drive.

Here’s how to create a drive image (clone) or as Windows 7 calls it – a system image – in Windows 7.

First insert a blank writable CD or DVD in your computer’s DVD/CD drive. You’re going to need to create a Windows 7 rescue disk first so that, in case you can’t get into Windows to access your backups, you can boot with the rescue CD/DVD which contains all the tools you need to fix your system and/or recover it using your “System Image” (another name for drive image or clone).

2. On the left side of the dialog, you’ll see “Create a system repair disc” click it. Don’t skip this step!

3. You’ll see a dialog that says: “A system disc can be used to boot your computer. It also contains Windows system recovery tools that can help you recover Windows from a serious error or restore your computer from a system image.” You’ll also see your DVD/CD drive and an arrow to let you choose the DVD/CDRW drive you want to use, if you have more than one. Choose the drive you want to use and click “Create Disc.”

4. After you’ve created the disc, go back to the previous dialog and choose “Create a system image”. Make sure your external media is plugged in and ready – or if you have a second internal hard drive, make sure there is enough space available on it to complete the backup – if there is not, Windows will warn you.

5. Follow the Windows Backup wizard to create your system image ( drive image or clone). You’ll have the option of selecting a second internal hard drive, a hard drive partition other than the Windows partition, or an external hard drive or DVDRW drive where you can, if you wish, use multiple DVDs to store your backup – but we don’t recommend DVDs for storing backups – as you could end up having to use 30 or 40 of them for each backup – it’s neither practical nor cheap. And we don’t recommend a partition on the Windows drive either. If that hard drive goes bad, you’ll lose your backup. 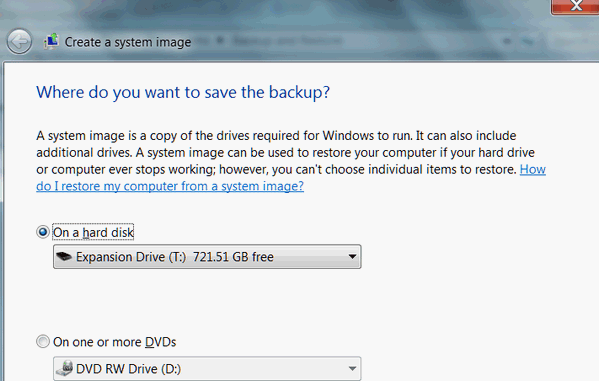 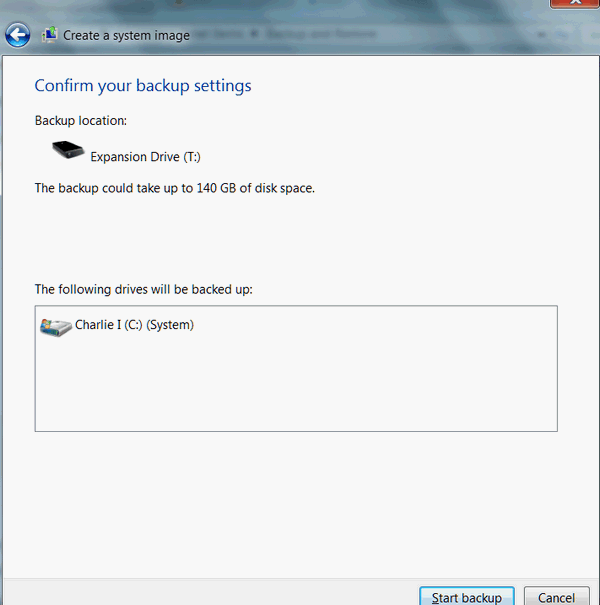 Above: There is approximately 300GB of data on my hard drive – Windows 7’s backup compressed it to 140GB or about half its original size. 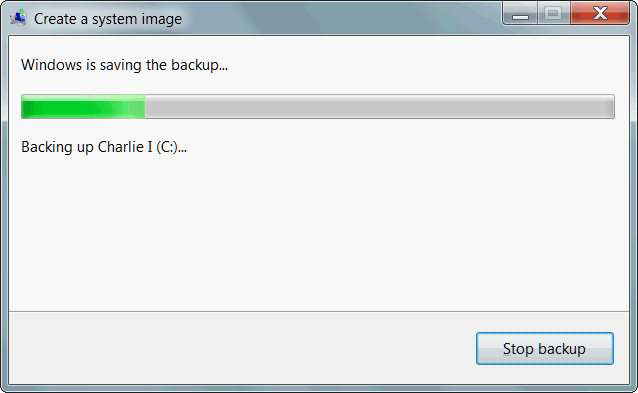 Remember too, you can use your system image to recover your computer even if your hard drive completely fails. All you need to do is install a new hard drive which has a capacity equal to or greater than the capacity of the hard drive that failed.

This tip will work in all versions of  Windows 7 (32 and 64bit) except the  Starter edition.