It’s the weekend again… so I went looking for something different, and I came up with an amazing  weather app called Ventusky. Why do they call it Ventusky? We’ll get to that in a minute.

You can view the weather anywhere in the world – or the whole world at once You can view the map by specifying what you want to look at – such as temperature, thunderstorms. snow cover, wind speed, barometric pressure, the freezing level, the and many more. Are you a Fahrenheit(°F) or a Celsius (°C) person? You’ll be happy that Ventusky lets you choose between them.

I spent over an hour viewing the animated maps and visualizations – it fascinated me. II particularly like the viewing the temperature, freezing level, and winds. The jet stream maps were also fascinating. But rather than trying to describe to you all you can do with Ventusky, you’ll see very quickly how much you can do just by visiting Ventusky. Once  you visit, you’ll quickly learn how to use the various viewing options and how to zoom in and out on the maps and more – it’s all very intuitive.

Also, you can view weather data from the past as well as current data – and look ahead with forecasts for anywhere in the world. You and zoom in and zoom out on an interactive, animated map.

I’ve reviewed a lot of weather apps – but I’ve never seen anything as fun, as educational and as comprehensive as Ventusky.

OK you’re wondering why they call it Ventusky? Ventusky is a creative combination of the Latin word for wind – “ventus” – and the English word “sky”. Pretty clever.

Meteorological visualizations and weather predication is the focus of Ventusky. But do I think Ventusky  is going to take the place of your good old Accuweather or Weather.com apps?. I really doubt it. But if you’re  looking for an amazing and comprehensive worldwide weather site,  one with magnificent animated visualizations of the weather anyplace on earth, you’re going to really like Ventusky.

Ventusky works in all major browsers, including Chrome, Internet Explorer, Opera, Firefox, Safari, and Microsoft Edge. If you don’t use any of those, I’d be willing to bet it works in whatever browser you do use.

OK enough – you get the idea.  Here are a few words from the developers.

“…The Earth’s weather functions as an interdependent system. For example, a hurricane in the Atlantic has the ability to influence the distribution of pressure formations in Europe. Occasionally, it may even make its way to Europe itself as a post-tropical storm. The Ventusky application allows for the illustration of the interdependence of the entire system, displaying the development of pressure, wind, cloud cover, precipitation, and temperature on the map.

For visualisation of wind data, we utilise current lines that are used to illustrate the movement of particles in liquids. Air and liquid have many similar physical properties, and, as published by Fernanda Viégas and Martin Wattenber (Hint.fm, 2012), current lines are suitable for illustrating wind as well. Because of this, the map depicts wonderful formations illustrating pressure lows that draw in the air around them. We have created an entirely new system of displaying waves. Through the use of animated arcs, our visualisation clearly differentiates the direction of movement and height of both wind waves and swells. For the other meteorological elements, we chose colour scales that appropriately illustrate precipitation, air pressure, and temperature. The colours correspond with the feeling that the given weather phenomena evokes in us. For temperature, blue illustrates cool weather while dark red depicts hot desert air…”

Here are some screenshots to whet your appetite: 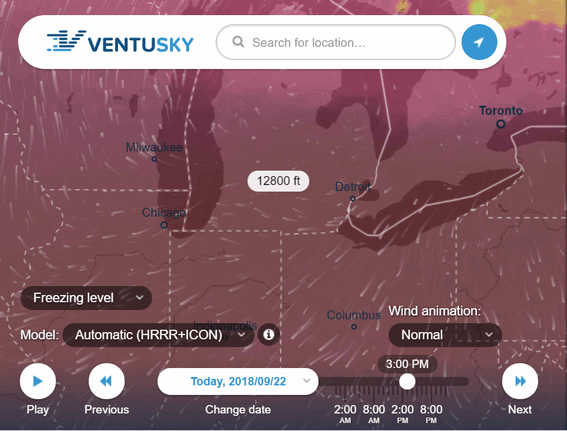 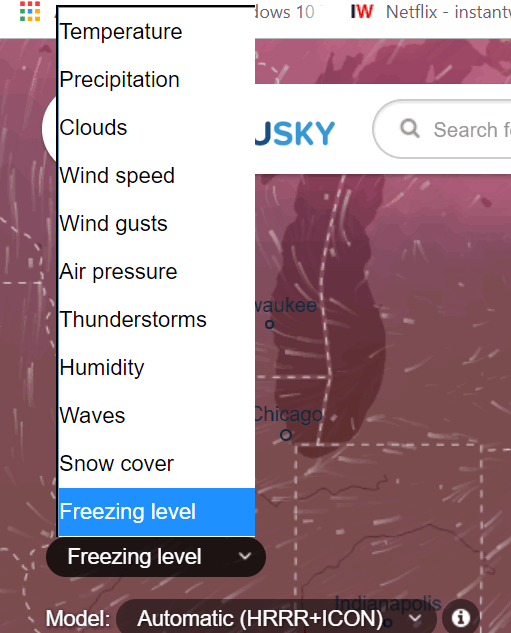 Ventusky – Choose the parameter you want . 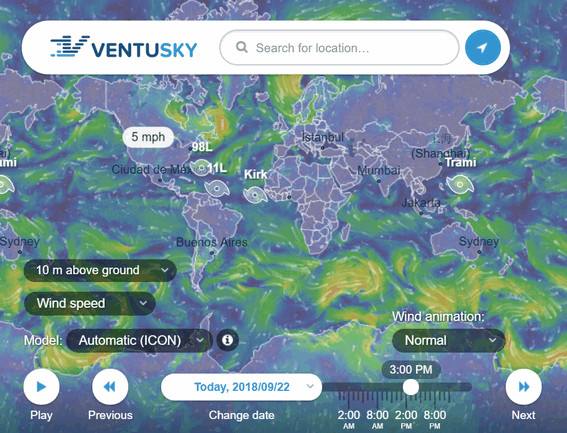 The weather – the world

Why not visit Ventusky right now?  I’ll be amazed if you’re not amazed!