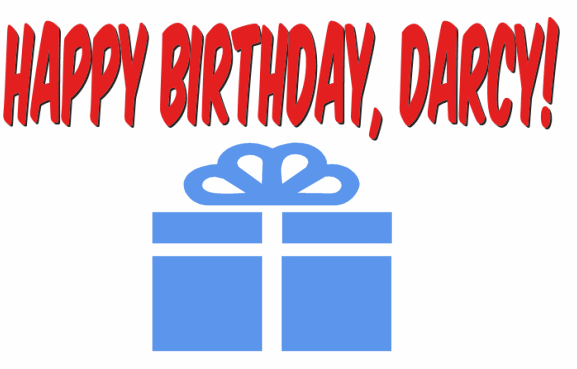 Without her, I doubt Cloudeight would be around anymore.

She’s a fighter and she really cares. She’s the one who takes the ideas I come up with and makes them work. My head’s always in the clouds — which is why we are called Cloudeight…not really. She makes this our business and our site work. And she comes up with some great ideas too – like Cloudeight Direct, just to mention one.

You don’t know this, but she used to own a bar, and that’s where I met her – in a bar. The bar was called Michigan^Tavern. Honest! I stumbled into her bar and started fighting with her right way (and that is the TRUTH!). Of all the gin joints, in all the world, I stumbled into hers.

For some reason, despite my arrogance and contentiousness, she became my friend. I was a helpless nerd who knew almost nothing about computers back then. My son was in a rock and roll band — and I made him the world’s worst website, but I was proud of it.

I showed it to Darcy. Rather than telling me that it looked like a pile of garbage she redid the entire site for me— she took the time to make the first website I ever made look great! This was back when she barely knew me and didn’t know my son at all.  What she did with the junky-looking website was amazing — yet she never took any credit for re-doing it and making it look nice.

The year was 1997 and the bar Michigan^Tavern was virtual — it was a chatroom that EB and some of her friends had created. So, we met in a virtual saloon, and it was there that Cloudeight was born.

In 1998, after she took me under her wing and taught me a lot about making websites and creating graphics…  we collaborated on and created the first Cloudeight site. It was called “Thundercloud and Eightball’s Christmas Graphics and you can still see it here. 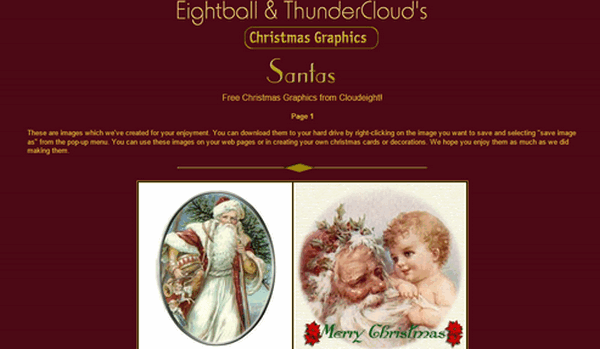 Above: A screenshot of Eightball & Thundercloud’s Christmas Graphics created Autumn 1998. This was the beginning of Cloudeight

We both worked other jobs back then. Every day whoever got home first would check the visitor counter on the website to see how many people had visited that day. I can remember the day we got fifty visits and we were sure we were on our way to Web stardom — ha! But there’s something beautiful about naivete. The excitement of having fifty visitors encouraged us, kept us going, and we kept us working together.

Then one fateful day, Darcy sent me an email with a scrolling background — and it had music playing. I thought she was magic! “How did you do that?”, I asked.

It did not take long, and we figured it out and we started designing and making stationery. It was then we created Cloudeight Stationery and it became wildly popular — at our peak, we were getting three million visitors a year and our stationery became the most famous stationery on the Web. 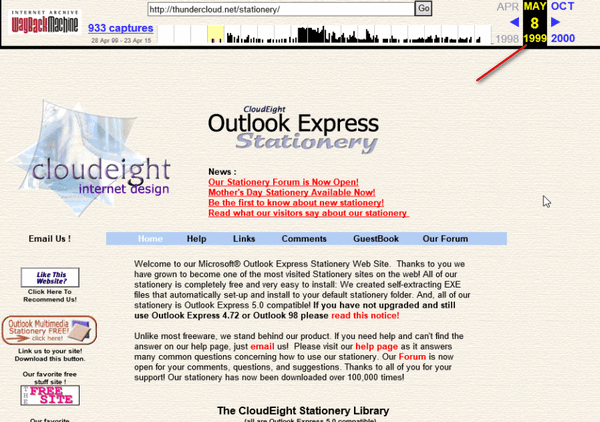 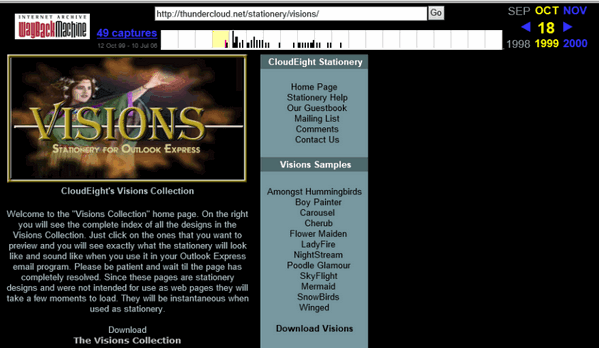 We loved our new business, and we were so excited when we were working together on a new stationery collection. We’d show each other what we had designed and couldn’t wait to release it to our subscribers and website visitors. Cloudeight Stationery grew and grew – and Cloudeight became a business and our life’s work too.

In 2002 we started Information Avenue and later InfoAve Premium to pass along some of the computer tricks and tips we learned over the years. It’s a good thing we did because when Microsoft introduced Windows 7, it had no email program and therefore Windows 7 users couldn’t use our scrolling-musical stationery. We could see the future and it didn’t look bright. Scrolling, musical stationery was our bread and butter. We had to completely reinvent Cloudeight and trying to keep our small business afloat became (and still is) a continuous struggle.

I do not doubt that if it weren’t for Darcy’s kindness and caring, we’d have gone belly-up many years ago. But she never gave up and we came up with some other ideas and. as you can see, we’re still around.

Cloudeight Direct Computer Care was her idea, not mine, and it really has helped us keep our small business going. And just as importantly it has helped us get to know many of the folks who helped us through some very dark days.

Whether you know her as Darcy or EB, she’s quite a lady and I’ve always felt lucky that, despite my cantankerous, contentious, and sometimes belligerent nature, she has always been able to see beyond all of that and saw a different part of me — the part I never show the world — the compassionate, generous, gentle part.

We’ve been friends since I walked into her virtual saloon twenty-four years ago, and I’m a better person for it. And any of you who have had the chance to know her are blessed too. She’s one in a billion.

Darcy and I have had our difficulties and disagreements like everyone else. But we’ve been partners now for over two decades. She’s always been the one I’ve counted on when things weren’t going so well.

She is my partner, she is my friend – and if you’ve ever had any dealings with Darcy, then, no doubt, she’s your friend too.

She’s the best partner and friend anyone could have. I poke fun at her in many of our newsletters, and she laughs along with everyone else. I am incredibly lucky to have her as my partner, but I’m even luckier to have her as my friend. And I hope you feel lucky that you know her too!

Happy Birthday, Darcy! May you have many, many more!

44 thoughts on “Wishing You a Very Happy Birthday, Darcy! ”