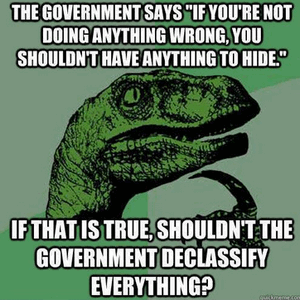 But I’ve Got Nothing to Hide

I was reading some of the articles we wrote on privacy back in 2002 and 2003 and realized things have gotten even worse. We thought privacy was scarce back then, but it’s extinct now.

We live in an age where everything we do, say, write, read, buy or sell is subject to various invasions of our privacy.

I hear some people say, “But I have nothing to hide. Only those who have something to hide have to worry about privacy.”

But those who say they have nothing to hide, hide things every day. We’re all human and we all do things in private that we wouldn’t do in public. If you’re a horrible singer and you sing in the shower, you’d feel violated if someone made a video of you singing in the shower – or dancing around singing in your kitchen. Are you doing anything wrong? No. Would you care if someone posted a video of you singing and dancing around in your home in private on Facebook for the world to see?

Those who defend the government’s right to violate their privacy because they say they have nothing to hide, hide things they wouldn’t want to be made public – and do so every day.

They say they have nothing to hide but I bet they have locks on their doors and curtains on their windows because, regardless of what they say, we all value our privacy, and none of us want our private space invaded.

Technology has advanced to the point where we’re all subject to surveillance on the Internet, using our cell phones, walking down the street, driving in our cars, shopping at our favorite stores. There are cameras in doorbells, streetlights, stoplights; there are cameras everywhere.

Big brother is watching and listening- or at least someone is.

Those who say they have nothing to hide embolden the watchers – even small towns now have stoplight cams that take photos not only of the license plates but also of the drivers of the cars. Cameras mounted on streetlights are actively watching city sidewalks. Cameras are everywhere inside stores and restaurants, and everywhere else.

To argue this makes our streets safer or our lives more secure like arguing that martial law makes our cities safer. Both may be true, but at what cost?

You can’t go anywhere, type anything, watch anything, buy anything, sell anything, email anything, or do anything at all on the internet without someone watching.

Assuming you use an Internet Service Provider to access the Internet, your service provider keeps records of every site you visit, every word you type, everything you buy, every email you send – in short, anything and everything you do on the web is logged by your ISP.

And if you buy into the idea that VPN services keep you safer by hiding your IP address and your location, you better think again. The VPN services keep records too, and even those who say they don’t, probably do. Are you willing to put your trust in a blind promise made by a company located in another country?

If you say, “I’m not doing anything wrong, so I don’t care what my ISP keeps track of…” you should. You should care if someone finds out from a photo you innocently posted on Facebook identifies you from picture’s metadata that can show what time the photo was taken, where it was taken, the date it was taken, where you live, and even if you registered your camera with the manufacturer.

Those who say they don’t care about privacy because they have nothing to hide should care. They should care about any of these infringements on their right to privacy.

Those who claim they have nothing to hide empower those who want to track everyone, everywhere, all the time. At one time this would have been an absurd abstract because the technology to invade the privacy of individuals simply didn’t exist. That is no longer true.

Cameras are everywhere, your Internet connection is monitored, your Web browsing is tracked and analyzed, and your cell phone calls and call data are being recorded. You can be tracked by you cell phone unless you move around with the battery removed. Cell phone calls can be intercepted and not just by governments and authorities, but by anyone willing to pay for the moderate price for surveillance software and equipment.

You’re thinking I’ve gone conspiracy theorist on you, off the deep end, wading into the twilight of paranoia, aren’t you?

I’m not. There are many people selling products that let ordinary citizens spy on your phone calls, your text messages, your emails, your passwords, your phone calls, your location, your chats, and many other activities. And how much does a product like this cost? One product – FLEXISPY – is available to anyone willing to pay $68 per month. If such a product is available to you, think how much more advanced the tools used by governments and authorities are.

As long as we have people saying, “I don’t care who sees what I do; I’ve got nothing to hide.” it’s only going to get worse. Everyone has something to hide or at least some things they certainly don’t want to be made public.

All this spying and intrigue made possible by technology is only getting worse. You can bet if it can be done, it will be done. And as long as the majority believes that privacy isn’t all that important because they’ve got nothing to hide, the door is open for those who want to invade your privacy and gather information about you.

It’s bad enough already; I can’t imagine how things are going to be five or ten years from now.

Everyone, even those who say they’ve got nothing to hide, has a right to and an expectation of privacy.

After 9/11 the citizens of the USA willingly gave up some personal freedoms because the government and politicians told us we would be safer. We allowed these restrictions of some of our basic freedoms thinking and hoping it would make us safer.

U.S. Government requests for information about Google services users are steadily increasing. But so far, Google has not given the government everything it asks for – at least not without a fight.

The following excerpt is from an article which appeared on Mashable, written by Matt Binder, “U.S. government requests for Google user data up 510% since 2010, report says“

According to a new report by end-to-end encryption email company ProtonMail, user data requests from the U.S. government to Google have increased a whopping 510 percent since 2010. And its requests for Facebook data are also growing, with an increase of 364 percent since 2013.

The United States is part of a global intelligence alliance known as the “Fourteen Eyes,” a coalition of 14 countries which agrees to share intelligence information with each other. These countries include the United States, Canada, the United Kingdom, New Zealand, Australia, France, Denmark, the Netherlands, Norway, Germany, Spain, Belgium, Italy, and Sweden…”

Now with technology advancing faster than at any other time in history, we all helplessly watch while what little privacy we left is being slowly drained away from us.

“Those who would give up essential Liberty, to purchase a little temporary Safety, deserve neither Liberty nor Safety.”

Those words appear in a letter widely presumed to be written by Franklin in 1755 on behalf of the Pennsylvania Assembly to the colonial governor.

Are you willing to give up your privacy and your liberties for a little temporary safety, or because you have nothing to hide? Everyone has something to hide, or we wouldn’t have curtains covering our windows, doors on our bathrooms and bedrooms, and locks on our doors.

If we had nothing to hid, we’d give everyone who wanted to read our emails our email passwords. Everyone has something to hide or at least things they would like to keep private.

Whether what they’re hiding is evil or not, I am certain that everyone has something to hide.

The next time you hear about someone’s privacy being violated, just remember that it could happen to you. And if things keep going like they are, it’s going to happen to all of us and privacy will no longer be a right or an expectation – it will become a privilege. And like most privileges it will not be a privilege that most of us will enjoy; it will be reserved for the privileged few – those with money and power.

Have we have gone so deep into the darkness that there is nothing we can do? I don’t know; I don’t have the answer. But I do know how things are, and I don’t know how we all let it happen.

No one has any power over us unless we give it to them. Now it looks to me like we gave the power to the wrong people.

The best thing we can do as individuals is to be vigilant and do our best to resist any further invasions of whatever privacy we have left.

One thing is true for sure… we all need to start thinking more seriously and not slough off all the privacy intrusions by simply saying… “It’s OK. I have nothing to hide.”

If we don’t start caring more than that, I don’t think any of us will welcome what the future will bring. We all have something to hide.  Our privacy is being whittled away and pillaged. And now there is precious little privacy left in this world.

2 thoughts on “But I’ve Got Nothing to Hide”