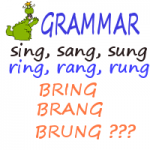 See I’m the type of guy who believes that if you speak or write so people can understand what you’re saying it don’t matter if you use swell grammar or knot. It’s plane and simple. Who cares if eye am a homonymophiliac?  It don’t matter I tells ya! As long as you gets your point a cross what difference do it makes? Grammar smammar!

You have these people – they are called grammaticians. And their job is to find fault with your grammar – and mine. It was these very same people who, in 1722, decided that since everyone spelled “grammar” “grammer”, they were going to change it to grammar. You will note they didn’t touch hammer. Can you imagine hammar? Or how about one who scams? Should we call them scammers or scammars? And today, anyone who sends out a bunch of unwanted emails is still a spammer and not a spammar – although as soon as the grammarians get their hands on it you can be sure it will be spammar. Wait? It’s the spellophiliacs that makes up spelling rools, right? I’m sure grammarians are equally fussy about spelling. Can you imagine a grammar textbook with a ton of spelling errors? Why that would be sacrilegious.

I like to look at grammar web sites because with all the things going on in the world, I find it fascinating that someone fusses with grammar for a living, I mean these people get irrate if I do a little sentence splice, if you know what I mean, and I ramble on and on using commas instead of subordinate conjuctions, semi-colons or good old-fashioned periods. Ya’ll get my drift doesn’t you?

I’m telling you this: when the Oxford English Dictionary made “heart” a verb (as in “I heart you”) and included OMG and LOL,  you wonder where this world is headed.

Let’s look an article from our site pick Grammar Girl. She’s all in a tizzy about whether to capitialize the names of cocktails. I am not kidding. Does it really matter whether you capitalize Bloody Mary or Margarita? Don’t they both taste the same?
Anyway…let’s fuss on about grammar.

“Some cocktail names are easy to figure out because they go by the standard capitalization rules. If they don’t include something that would be a proper noun, such as a person’s name or a city name, don’t capitalize them. So “mimosa,” “mudslide,” and “pina colada” are all lowercase.

Why Some Cocktails Aren’t Capitalized: “Manhattan” and “Daiquiri”

So far, so good. I thought drinks that had a person’s name, a country name, or city name would also followed the standard capitalization rules: they’re proper nouns, so they’d be capitalized. But that’s not the case because these names fall into a special category: they’re not literal uses of the proper nouns.

For example, most dictionaries and style guides recommend keeping “manhattan” lowercase when it is the name of a cocktail, because even though the name is derived from the city name Manhattan, it’s no longer associated with the city. They also recommend lowercase for “daiquiri,” even though the cocktail name comes from a city named Daiquiri in Cuba…” (Grammar Girl “When Should You Capitalize Cocktail and Food Names?“)

I have nothing more to add to that. I think Shakespeare (who made up grammar as he went along) had it right when he wrote that grammar was “much ado about nothing”. And no that shouldn’t be capitalized and yes I took that out of context. Lash me.

For all those who think that grammar is really cool and for all those that think it is amusing that with all the people getting killed and irradiated and losing their jobs and otherwise having a hard time getting through life, some people still think grammar is the most imortant thing on Earth – I proffer our site pick “Grammar Girl” – AKA QuickandDirtyTips.com  for your perusal and enjoyment.

May we all go back to spelling gammar grammer so as not to endanger hammer, scammer, and spammer. Alas I have no impact on the world of grammar except for being a juicy target of grammarian insults. It’s OK. I take it in stride.

So if grammar is important to you or if you just want to see that I’m not just making all this up – and there really are people who care about this kind of stuff, visit today’s site pick “Grammar Girl” AKA Quick And Dirty Tips.

No, no, no! Not that kind of dirty! And I herewith give full permission for Grammar Girl to publish this fine example of writing on her web site. It’s the least I can do. I want  to further the cause of swell grammar every wear as much as possible There is too many people who don’t write too darn good! They write so badly we can’t even understand what theys trying to say!

We need more grammar girls and less bloody marys; that’s the truth and nothing but the truth, Grammar Girl!