We want to point out – before we get started – that the developer doesn’t list Windows 7. But we guarantee you that his program works on XP, Vista and Windows 7 – both 64bit and 32 bit. We know because we tried it 🙂

Judging by the email we get, some of your favorite freeware programs we feature, are screenshot tools. There are a lot of them out there. Some are fairly basic and some of them loaded with features. The best free screenshot tool is FastStone Capture – but the newer versions are no longer free. The older version is no longer supposed to be free, but we know where you can get it.

Today, we found, if not the most feature-full screenshot tool, certainly the coolest. It’s just fun to use. All you have to do to use it, is press the PrintScreen key. You can’t get much simpler than that – unless someone invents a program where all you have to do is think about taking a screenshot and it does what your mind commands. So far, no such thing. Probably in a few years though.

What makes this screen capture tool unique? When you snap a shot, it floats the screenshot on your desktop. I don’t know why this intrigued us, but it is pretty nifty. You have the options to edit it, save it, or send it via email.

What PrtScr lacks in features it makes up in quickness and in style. If you just want to take a quick screenshot and save it or send it via email, it doesn’t get any easier than PrtScr. 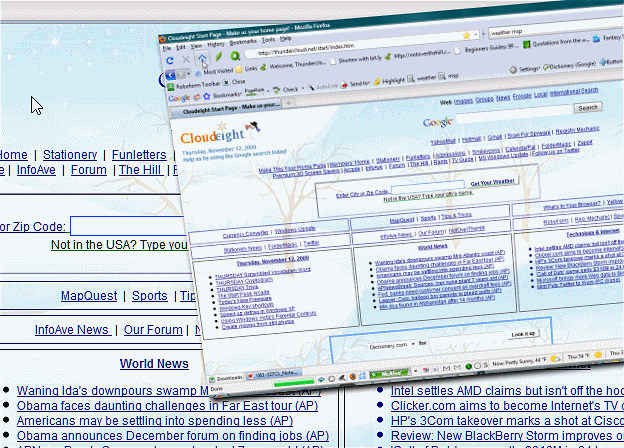 There, see? The screenshot floats above your screen – such style! No other screenshot tool does it this cool.

And, we’re getting pretty cool too. Trying to drag Eightball into the YouTube era, hasn’t been easy. I had to drag her kicking and screaming. Now I think she’s getting ready to open her own YouTube studio – I just hope she doesn’t start uploading videos of her and some bozo dancing. That would be really — disconcerting.

Anyway, pardon the music in this video (we didn’t create it, we’re just being good people and sharing it). You can watch some of the nifty things you can do with PrtScr by watching the short video below. You’ll surely want to turn your sound down. I’m just sayin’.

OK. All you screenshotophiles, if you want more information or you want to grab this freeware screenshot tool for your screen capturing needs, feel free. It’s free, we’re darn near free and PrtScr is free for the taking. Visit the home page of PrtScr and float, baby, float.