This is not going to be anything like “60 Minutes”. Well, maybe a tad influenced by Andy Rooney. So anyway… the older I get the more skeptical I get. I can’t help it. Once you’ve seen it all before, you’ve seen it all before and it gets harder for hooligans to pull the wool over your eyes. If you’re younger than sixty, you won’t get this, but trust me you will. There are so many things going on in the world today… I sit here and roll my eyes. If I say “rolling my eyes” everyone knows what that means. It’s the universal sign of incredulity. I spend most of my time being incredulous. And I write this with an incredulous gasp and a grain of salt.

The pandemic and the political scene and a whole bunch of other things have caused me to stop watching the national news. Whatever happened to Huntley & Brinkley? Walter Cronkite? Whatever happened to the news? Anyway, I stick with my local news where I can actually get the news, hear about lost puppies, courageous firemen, and ice cream socials in the park… and not somebody trying to tell me what I should believe.

That reminds me of a Rolling Stones song…

“When I’m watchin’ my TV and a man comes on and tells meHow white my shirts can be,But he can’t be a man ’cause he doesn’t smokeThe same cigarettes as me…” The Rolling Stones (Jagger/Richards)

So, by now you’re wondering where the heck this screed is going. Well, I’m getting to it. But I had to do a little foreshadowing, you see. Because what I’m about to tell you comes from the deepest part of the well of things that make my eyes roll.

Now they tell me… when I’m old and it’s too late.

I have no idea how many hot dogs I’ve eaten in my life. I sure don’t eat many now, but when I was younger, I use to go to a lot of Cleveland Indians (soon to be the Cleveland Guardians) games. I can remember my grandfather and me sitting there in our box seats eating a lot of hot dogs. I bet I averaged three hot dogs a game. I’m not a “maths” wizard, but I know that thirty-six times three equals 108. That’s nearly two hours I chomped off my life every time I went to a baseball game. My grandfather was not trying to kill me – I’m sure of that. Seriously, I mean this stuff is really goofy – my eyes are rolling.

They say for every serving of red meat I eat – I shorten my life by six minutes. For every chicken wing I eat I lose three minutes and washing it all down with an ice-cold soft drink costs me another twelve minutes of life. Add an order of fries to that? There go another eight minutes of my life.  And so on.

So, let’s see. A simple pauper meal of one hot dog, a serving of french fries, and a soft drink take – let me see:

Takes me about ten minutes to eat it and costs me 56 minutes of life. Yikes! That’s nearly an hour!

Who believes this stuff? How can I get government funding to do my own “study” so I can make stuff up? You know all these studies were done using taxpayer dollars and government grants.

My unfunded, unpublished, study that only you are privy to is called…

“Minutes you lose for foods that you chews”

You get the idea, right? You can make this stuff up! Who’s going to prove you wrong? Nobody.  Did you ever hear anyone say… “Poor aunt Mable, she died sixty-seven thousand minutes early because she ate all those hot dogs? I told her to knock it off!”

Oh yes, let’s not forget the government-funded studies that tell you what foods can add minutes to your life – I’m serious here -I can hear you snickering.  For instance: A classic peanut butter and jelly sandwich adds 33 minutes to our lives. I’m serious – don’t snicker.

So, let me summarize. If you eat a hot dog and a peanut butter and jelly sandwich together, you only lose 3 minutes of your lifespan (advanced “maths” here … 36-33=3) and you’ve had some mighty fine eating experience and you can enjoy that hot dog knowing you’re only going to kick off three minutes sooner rather than thirty-six minutes sooner. Just think! A single serving of french fries takes eight minutes off your life, but add a peanut butter and jelly sandwich, and you gain twenty-five minutes! The “maths” are simple. 33 minus 8=25.

So, if you’re planning on going to a ball game and eating hotdogs, consider making some PB&J sandwiches and taking them with you. Then, while you’re cheering on your favorite team and chomping on a hot dog, eat a PB&J sandwich too. By my calculations, you could eat twelve hotdogs and only shorten your life by just thirty-six minutes.

And one more thing before I let you go eat. Did you ever see the serving sizes on stuff? How about cereal? I just looked at a box of Cheerios. A “serving” is 1 cup. Try this experiment. Measure out one cup of Cheerios and put it in a cereal bowl. No one eats one-third of a bowl full of cereal. You fill the darn bowl up and pour milk on it, right. Here’s what a serving (one cup) of Cheerios in an ordinary cereal bowl looks like. 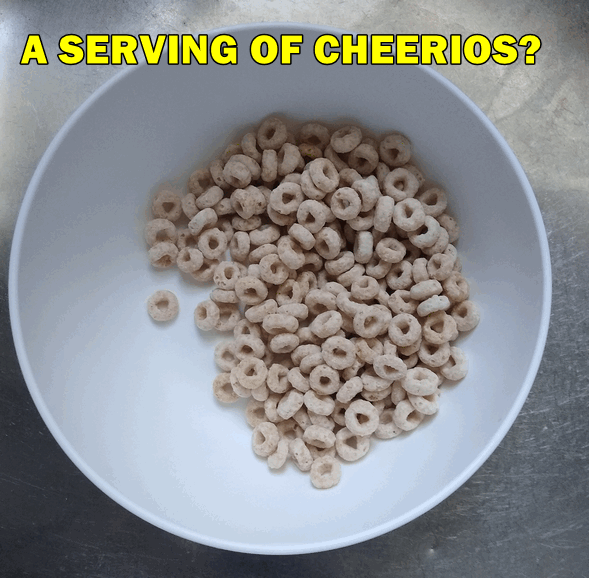 Go eat a peanut butter and jelly sandwich and add 33 minutes to your life. I’ve got my stopwatch ready.

Is it any wonder that I am a cantankerous, skeptical, incredulous old coot?