When Microsoft announced version 1903, they also announced the end-of-life date for Windows 10 version 1803 (April 2018 Update). For Windows 10 Pro and Home users that date is 12 November 2019. As the end-of-life nears, Microsoft will force the update to Version 1903 (May 2019 Update). But if you’re thinking you can relax because you have until November, think again. Microsoft will begin rolling out the forced updates via Windows Update starting in June 2019.

“For Windows 10 devices that are at, or within several months of reaching, end of service, Windows Update will automatically initiate a feature update; keeping those devices supported and receiving the monthly updates that are critical to device security and ecosystem health. The Windows 10 April 2018 Update (Windows 10, version 1803) will reach end of service on November 12, 2019 for Home and Pro editions. Starting this June, we will begin updating devices running the April 2018 Update, and earlier versions of Windows 10, to ensure we can continue to service these devices and provide the latest updates, security updates and improvements. We are starting this machine learning (ML)-based rollout process several months in advance of the end of service date to provide adequate time for a smooth update process…”

After Windows 10 version 1903 is installed, there will be no forced updates. The user will be notified that a feature (version) update is available and they will have a choice to install the update or keep their current version. They will not be forced to update until the actual end-of-life (End-of-Service) date approaches. The current lifecycle of Windows 10 feature updates (version updates) is 18 months from its release date.

So, if you’re using Windows 10 version 1803 (April 2018 Update), and you’ve been reading that Microsoft is backing off its hardline stance of forcing Windows 10 feature updates on its users… it does not apply to you. Starting in June 2019, Microsoft will be rolling out the forced update for all Windows 10 version 1803 users. It will be a slow rollout starting in June and ending sometime in October 2019 so many of you will not be affected right away.

If you’re not sure what version of Windows you’re using, right-click your Windows 10 start button, click on Run, type WINVER in the Run box and press Enter. You’ll see this dialog appear showing the Windows 10 version number and the build number. 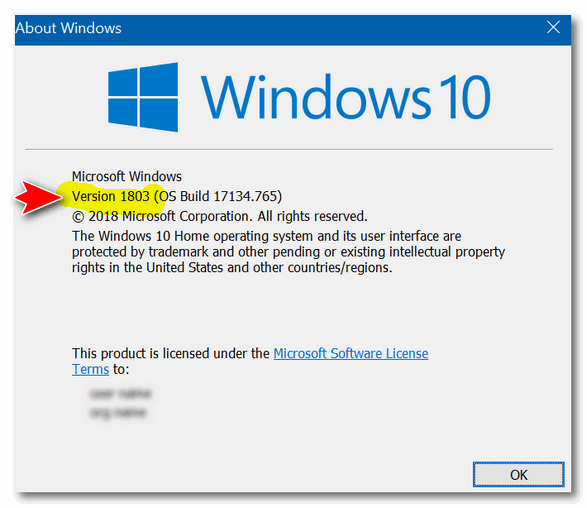