There have been a lot of people reporting that Google Chrome browser continually crashes after they installed the Windows 10 April 2018. Microsoft is aware of the issue and says that a fix is on its way soon.

Some Chrome users report that not only Chrome freeze but the screen freezes too. Microsoft says that user experiencing this problem should use this Windows key shortcut to wake the screen:

Some users report  that after updating to Version 1803 (Windows 10 April 2018 Update) their on-screen keyboard no longer works.

In Settings click on “Devices” then “Typing” – in the menu on the left.

Under ‘Touch keyboard’ make sure that switch under “Automatically show the touch keyboard in windowed apps when there’s no keyboard attached to your device” is turned on.

Some people report that their mouse movements and cursor speeds  are slower after installing the April 2018 Update (version 1803). The cause of this problem is not known and has not yet been acknowledged by Microsoft. If this happens to you, try unplugging your mouse (if corded) and plugging it back in. If it’s a wireless mouse, unplug the USB receiver and then plug it back in.

If you install the Windows 10 April 2018 Update and find your microphone no longer works, try this:

Open Settings > Privacy > Make sure that the switch under “Let apps use my Microphone” is turned on.

After installing the Windows 10 April 2018 Update, some users are reporting that Edge doesn’t start. And even running Edge repair or reset does not solve the problem. The cause of the problem is not known. The solution for now is to use another browser until Microsoft releases a fix.

Windows 10 April 2018 Update (Version 1803) in some cases assigns a drive letter to this hidden partition and it becomes visible in File Explorer.

If it bothers you to see the hidden drive, you can hide it by removing the drive letter. Not recommended, but if you’re comfortable with running DOS commands… you can hide the drive by following the instructions on this page.

If you have serious problems with Windows 10 April 2018 Update (Version 1803), you can roll back to the to the previous version of Windows without losing any programs, folders, or personal files (no guarantees, but it has worked many times for others).

To roll back to the previous version of Windows do this:

In Settings click on Update & Security > Recovery > Go back to a previous build. 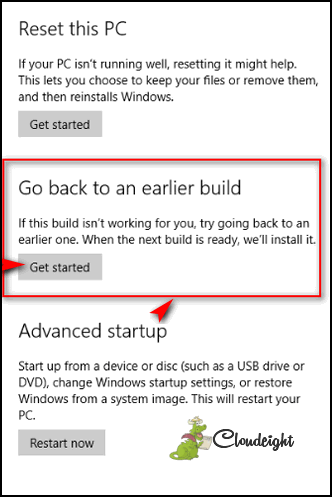 If you want to wait until some of the bugs are fixed here are two ways you can do it.

Or, you can temporarily stop Windows update from installing any updates (including the April 2018 Update)  by using Windows Update Stop. You can read more about that here.