I’m getting kind of jaded in my old age. Not too much impresses me anymore. While looking for a freeware pick of the week this week, I stumbled on one that is only 60 kilobytes. Do you know how small that is? We’ll the PNG image featured in this article is almost 60 kilobytes. Some Web pages are well over 60KB. My first thought was how can a program which is only 60KB be any good? It isn’t good. It’s great. 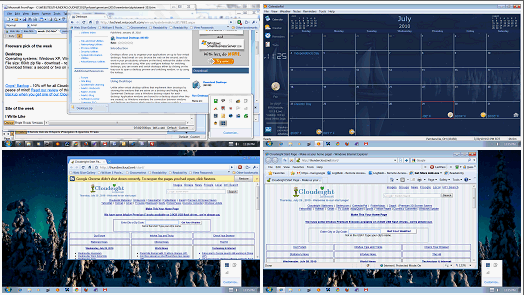 There are four separate desktops running on one Windows 7 laptop. To switch between them, just click on the one you want to use. It’s that easy.

Rather than prattle on about Desktops (which is a Microsoft application via Sysinternals), let call in the program’s developer to tell you more about this unique application – a lot of program squeezed into 60KB, let me tell you. Anyway here’s what the developer has to say:

“Desktops allows you to organize your applications on up to four virtual desktops. Read email on one, browse the web on the second, and do work in your productivity software on the third, without the clutter of the windows you’re not using. After you configure hotkeys for switching desktops, you can create and switch desktops either by clicking on the tray icon to open a desktop preview and switching window, or by using the hotkeys.

Unlike other virtual desktop utilities that implement their desktops by showing the windows that are active on a desktop and hiding the rest, Sysinternals Desktops uses a Windows desktop object for each desktop. Application windows are bound to a desktop object when they are created, so Windows maintains the connection between windows and desktops and knows which ones to show when you switch a desktop. That making Sysinternals Desktops very lightweight and free from bugs that the other approach is prone to where their view of active windows becomes inconsistent with the visible windows….”

What more can we say? A 60KB program that doesn’t even need to be installed, that gives you four separate workspaces. It’s just too cool. And because it’s so cool, we’ve named Desktops our freeware program of the week.

You can read more about and/or download Desktops by following this link.

The Details for the fussy: